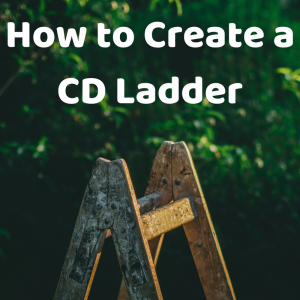 In a recent post, I talked about how I keep some of my savings (including my emergency fund) in CDs, or Certificates of Deposit.  Because I need to access that money now, I have to close a CD early.  What I should have done to prevent that is to keep my money in a CD ladder.  Here, I’m going to explain to you what a CD is, what a CD ladder is, and why I think it’s a good savings mechanism.

As defined by Investopedia,

A certificate of deposit (CD) is a savings certificate with a fixed maturity date, specified fixed interest rate and can be issued in any denomination aside from minimum investment requirements. A CD restricts access to the funds until the maturity date of the investment. CDs are generally issued by commercial banks and are insured by the FDIC up to $250,000 per individual.

While CDs used to involve going to the bank and getting actual certificates that later had to be redeemed, now you can do this all online.

So let’s say you have $500 that you want to save for at least a year.  Doing a quick scan of current rates, you can get a 1 year CD at a 2.3% interest rate.  At the end of one year, you will have $511.50.  (Sure, that might not seem like much, but it’s more than you will make from any savings account.) Yes, you could possibly make more investing, but investments come with risks, and this is a completely safe place to put your money.

With most CDs, you can get your money out before the term is up, but you will pay a penalty (often 6 months worth of interest on any CD 12 months or longer).  The goal is, of course, to never need to break the CD early, but sometimes life happens.

What is a CD ladder?

When you create a CD ladder, you set up a series of CDs that mature at a set interval.

Note that interest rates are much better with CDs of 12 months or more, so those initial CDs of under a year might not seem like as great of a deal, but the goal is to get your ladder started and then get your savings rolling.

I know what you’re thinking.  Keeping track of 12 CDs sounds like a lot of work.  What if I forget to get a new one and suddenly I’m a month off?

CDs typically have at least two options upon maturity – roll the funds into another CD of the same length or close the CD and deposit the funds into a bank account.  (Some will also give you an option to rollover just the initial funds and deposit the interest.) Yes, in the initial months of a 12 month ladder, you will have to be paying attention and rolling into a 12 month CD, but once that’s done, you’ve got a great ladder that will just keep growing!

I’m going to work to get my emergency fund back into a solid ladder.  If the money is just going to sit in a bank account, I might as well be earning as much interest as possible.  And let’s be honest, once it’s locked away, it’s much harder for me to spend on a whim and that’s never a bad thing!

So if you’ve got some money sitting in an account just earning a small amount of interest, look into CD ladders.  See what your bank offers.  Don’t forget to check out the early withdrawal penalties, of course, but if you’re looking to grow your money, this is a great, safe place to start.