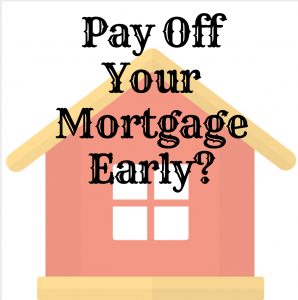 So let’s say that your personal finance life is going pretty well.  You’ve managed to pay off all of your debts except your mortgage.  Is it time to start paying more on that mortgage so you can pay your mortgage early?

Why would you want to pay your mortgage early?

Okay, then why wouldn’t you want to pay your mortgage early?

Well, the big question is what else your money could be doing for you?

Many people just don’t have the cash flow to be paying extra on their mortgage.  They’re paying off other debts, building up savings, paying regular expenses and doing fun things like taking reasonably priced vacations.  But if you’re doing all of that and still have money leftover in your budget, why not pay your mortgage early?

Take a look at the interest rate on your mortgage.  Let’s say you’re paying 4%.  Could you make a higher return by investing your money? Sure, investments come with risk, but a 4% return is pretty low, and if you’re looking long term, you should certainly be able to earn a higher rate of return.

Additionally, some people will argue that you should look at inflation.  Let’s say your mortgage payment is $1000.  $1000 buys much more now than it will in 20 years.  Looking at one inflation calculator, $1000 in 1998 has the same buying power as $1528 today.  So theoretically, though that payment won’t actually change, it will feel like less.  (Of course, this assumes that your income is moving with inflation.)

Finally, a lot of people like to have some liquidity in their finances.  If you pay extra funds into your mortgage, if something happens and you need that money, you’re going to have some difficulties.  But if you invest the money, you can pull it out of the stock market by paying off your investments.

Okay, but should I pay my mortgage early?

It’s really a personal decision. It’s what works best for you. Some people really want to get the most for their money, so for them, I would recommend investing the extra they would pay. Other people struggle with the emotional impact of debts, and for them, I would recommend paying extra towards the mortgage, if only for the peace of mind. There isn’t a wrong answer here. It’s what works best for you.