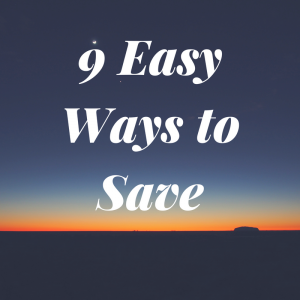 Recently, an interesting thread caught my eye.  What are the easiest changes that make the biggest financial difference in your life?  I went through the thread and pulled together some of the best ideas.

Set Up An Automatic Transfer – When your paycheck hits your bank account, have funds automatically transfer into your savings account or retirement account.  This also works if you’re saving for a vacation.

Bank Your Raises – Similarly, if you get a raise, have the increase in money automatically transferred to a savings account.  You’re already used to living on less, so why not keep that budgetary level and save the extra money.  (Another option is to save half and budget half.)

Drink Water – It’s free (or cheap) and better for you than soda.  Just by getting water instead of a soda or tea when you go out to eat, you can save a few dollars without realizing you’re missing anything.  Also, frequently when you think you’re hungry, you’re just thirsty.  Try drinking a glass of water first.

Bring Lunch and Coffee – Okay, this is an obvious one, but it’s worth taking a second look.  I typically bring my lunch, but splurge every so often and eat out.  For a while, I was allowing myself two lunches out a month, but that number slowly increased.  I need to get it back down again.  I work in an expensive part of town, and while my meals out are delicious, they’re not cheap.  Plus by making it a special treat, I find I really enjoy that meal out so much more.

As to coffee, my office has cheap coffee available for 50 cents a cup.  That’s pretty inexpensive.  But I drink black coffee, and doing the math, it’s cheaper if I bring my own (also it’s much better quality).  If I were using the creamers and syrups, it might not be such a good deal.  Yeah, I’m not saving much, but it adds up.

Right now, the big trend is cold brew.  You know how you make cold brew coffee?  Put some coffee grounds and water in a jar and let them sit for a day.  Strain the coffee, and voila!  Cold brew!  Don’t pay an arm and a leg for it.  Don’t buy the concentrate in the store.  Just make your own.

Learn to Cook – The hardest part about not eating out is that you have to cook for yourself.  I admit, I’m not a great cook.  But I’m learning.  There are a lot of great resources online for simple recipes and you come to terms you don’t understand, you can always find a video explaining in detail.  (Example – do you know the difference between simmering and boiling?)  I’m a fan of making big meals and portioning things out into single servings to be frozen for later.

Review Monthly Subscriptions – How many monthly subscriptions do you have?  That includes everything from magazines to streaming services.  Now multiply that amount by 12.  Are you okay with spending that much money on that one thing every year?  Try multiplying by 60.  In five years, will it have been worth it to have spent that much?  I cancelled a few magazine subscriptions this way.  The subscriptions were cheap – around $20 a year – and while I enjoyed them, I decided that I’d rather keep the subscriptions I truly delighted in reading and cancel the rest.

Avoid Impulse Purchases – This one is tough for me.  While I’m good at waiting on larger purchases, I’m not so great when it comes to smaller purchases.  I see something neat in the store and I buy it.  This is not the best way to shop. I need to be better about making a note about the item and then waiting.  If I still want it a few days later, maybe it’s worth buying.  Most likely though, I will have realized I can absolutely live without it.

One person said they only allow themselves to shop online on the first of the month.  This is amazing and for me, sounds near to impossible.  But I like the idea of making online purchases only at certain times. If there are things to purchase, write them down, and then every Saturday, go to your computer and make the purchase if you still think it’s necessary.  I may try this out.

Be Okay with Adequate – How many times do you have something that’s good enough, but still want to upgrade?  Or more annoyingly, have people encouraging you to upgrade?  I had this with my last car.  In my family, it’s common to get a new car every 3-5 years.  My last car was 11 years old when I finally traded it in – and I only did so because it needed repairs that were going to cost more than the car was worth.  And yet, 11 years isn’t that long to have a car.  I fully expect to have my current vehicle for at least that long, if not longer.

I would love to upgrade my computer.  The new laptops are thinner, faster, and just look way cooler. But the one I have now works perfectly well.  I don’t need to spend money on anything new when the one I have is perfectly adequate.