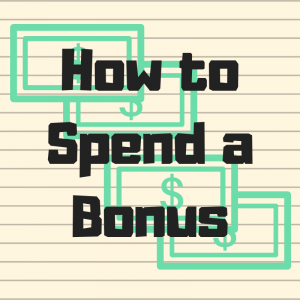 I was awarded a mid-year bonus at work and it recently hit my bank account.  After taxes, it ended up being a little under half of one of my paychecks, so not a world-changing amount, but also not an insignificant amount.  Now I have to decide the best use for the money.

The common advice you hear is to immediately put your entire bonus into savings.  After all, it’s not money that I anticipated receiving, so putting it all into savings should be pretty easy.

I do have some expensive home projects that I want to complete over the next few years (new flooring, replacing windows), and it wouldn’t be a bad plan to get started on saving for those projects.  I also put a pretty big dent in my emergency fund over the past year or so, with surgery and home repairs, and replenishing those funds is an important part of my budget right now.  Instead of just putting aside a small amount of money every month, I could put the entire bonus into my emergency fund.

I currently have two debts to my name – my car payment and my mortgage.  I have decided that at this point, it isn’t in my best financial interests to put extra money towards my mortgage, but I would like to pay off my car loan sooner rather than later.  The interest rate isn’t terribly high, but I would feel more comfortable without the outstanding debt.  This bonus certainly wouldn’t pay off my car loan, but it would get me closer to having it paid off.

Like most people, I have some major bills that hit once or twice a year.  Things like my property tax payment (mine isn’t escrowed by my mortgage company), car and home insurance, and a number of other fees that show up.  I use YNAB (You Need a Budget) to track my budget, and I have setup various categories where I save money towards those bills.  For example, I make a point to set aside 1/12th of my property tax bill every month so that when the bill comes due at the end of the year, I have the money ready.  If I didn’t prepare for that bill, my finances would be absolutely destroyed.

With the YNAB method, there are four rules.  The ultimate goal is Rule 4 – live on last month’s income.  At one point, I was successfully living by this rule, but with big expenses coming in (and honestly, some poor planning), I’m no longer at that point.  I will say – this is a huge advantage of YNAB.  When I was hit by some big bills, it wasn’t that big of a deal because I did have the float to work with.  However, now I have to rebuild my buffer.

I’ve been working to save up enough money so that I have enough money in my buffer to be able to live on last month’s income, but it’s been slow going.  This bonus would definitely help me get closer to that goal.

I think the best thing for me to do with this bonus at this point is a combination of two of these options.  I’m going to do what I do with every bonus and immediately put half of it into savings.  This time, it’s going into the emergency fund.  I spent some time debating what to do with the other half and decided to put it towards my Rule 4 goal.  This essentially means just dumping it into my budget, but with the added bit of cash plus some strict budgeting, I’m hoping to get back to Rule 4 by the end of the year.