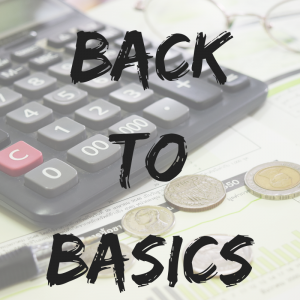 As I have mentioned over the year, this year has been a bit of a nightmare for my budget.  In the spring, I had unexpected surgery and my air conditioner died.  I also took a long-planned European vacation, which was obviously a great thing, but even with planning, it put a dent in my finances.  I’ve also been rehabbing an unrelated injury, which has meant weekly copays to a physical therapist, plus a bit of “retail therapy” as well.

While I haven’t spent myself into debt, when I took a hard look at my budget last month, I was really disappointed in myself.  When you find yourself in a good financial state, it’s easy to start taking that for granted.  Of course I can go out for dinner with friends or buy that inexpensive item at the store.  I was at the point where I was paying attention to large purchases, but not small ones.  I was taking advantage of deals on things that I wanted, but perhaps didn’t need.

And suddenly, all the work that I had done putting a bunch of padding into my budget was gone.

So I decided that September was going to be a “no spend” month.  Now, that doesn’t actually mean no spending.  Of course, I have to pay my bills, and it’s not like I had enough food stocked up around the house to not need to buy groceries for the month.  It didn’t necessarily even mean no splurging.  I guess a better name for it would have been “conscious spending month.”

My goal was to make a point to only buy what I needed, with few “unnecessary” purchases.  So when I went to the grocery store, I stuck to my list.  I didn’t buy things I didn’t need, just because they looked good.  Of course, they wouldn’t have gone to waste, but the point was to try to keep my spending low to build up my financial buffer.

This also meant ignoring any and all sale emails.  More than once, I went to a website and placed items into a shopping cart, but when it got to the point of paying, I changed my mind and closed the browser tab.

I did go out to lunch with coworkers twice this month, but turned down lunch offers as well, and only went when I truly wanted to go and when I knew the lunch I had brought would still be good for the following day’s lunch.

So it was time to go back to personal finance basics.  And I’m honestly impressed by how well it has gone.  I haven’t felt deprived, and my budget is looking better already.  One big thing I did was set a goal.  At the end of the month, once the bills were all paid and money was set aside for upcoming expenses, how much money did I have left?  My goal was to increase that for the following month.  While there are still a few days left in September, unless something major happens, I am happy to say that I have succeeded in my goal.

I’m going to stick to this plan next month as well.  I think it’s going to be easy to start to slip more and more, but I need to keep my eyes on the prize – building up my finances so that when something else hits, I’m ready.  And saving up for my next big vacation.  I had way too much fun to not do that again.