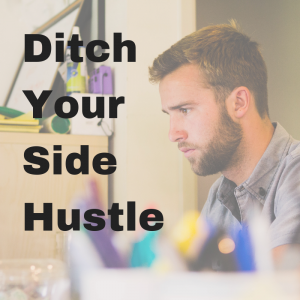 One of the biggest pieces of advice that you will see when it comes to improving your financial situation is that you should pick up a side hustle – some sort of a second job to supplement your income.  The general wisdom is that it’s easier to make more money than it is to reduce your expenses by the same amount.

I’m a big fan of the small side hustle.  There are plenty of people out there looking to hire people for small gigs, everything from freelance writing to household errands to pet care.  If you can find the right side hustle, you can bring in regular additional income without too much stress.

But the problem is that side hustle income can be addicting.  Who doesn’t want to bring in extra money, right?  And if you have a chance to bring in more money, why wouldn’t you do it?  For example, a friend of mine does pet sitting.  She started out small, but word quickly spread about her services and she suddenly found that during the busy times, she was spending multiple hours every day performing her side hustle while still working full time.  She was making good money, but was finding herself incredibly exhausted and missing out on activities and events with friends and family.

It was a tough call, but she had to start turning down some of her pet sitting gigs.  Yes, she then made less money, but she was able to enjoy her life much more.  (She also decided to increase the cost of her services over holidays, which did mean that some of her clients opted to not hire her during those times, but she ended up making more money with less work.)

It’s very easy to let your side hustle take over.  And it’s important to find the balance between making money and living your life.  And it’s all about figuring out what your goals are.

Obviously, paying off debt is a huge project for many of us.  And if you have high interest debt (such as credit card debt), maybe it makes sense to you to work every hour you possibly can so that you can get rid of that debt sooner.  But you absolutely don’t want to be risking burnout.

It’s also important to figure out what you’re actually making for the time you’re putting in.  Think about how much money you make per hour at your regular job.  Now think about how much you’re making per hour at your side hustle.  Maybe you’re bringing in an extra $100 a month, but how many hours are you working to make that money?  A friend of mine picked up a side hustle that made her an “easy” $75 for a weekend of work, but she was putting in 16 hours to make that $75.  That’s less than $4.75 an hour.  Now, if she truly enjoyed the work, maybe it would be worth it.  But she soon found herself working at this side hustle three weekends a month.  She found herself dreading the work, even though the extra money was awesome.

Rather than completely quit, she talked to the owner and asked to step back.  After all, at one point, she had really enjoyed the gig.  She now works one weekend a month, occasionally a second weekend when he really needs the help.  It’s still a lot, but she finds that she once again enjoys the work.

I’m sure we all know that person who is working multiple side hustles.  And it can certainly be tempting.  But you have to find balance.  If you find yourself dreading your side hustle, take a look at your finances and see if you can step back.