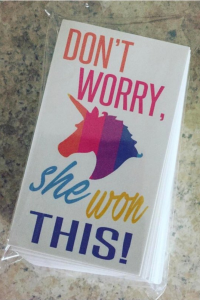 In researching MLMs, Multi-Level Marketing companies, I’ve come across a very concerning trend: sellers encouraging purchasers to hide their purchases from their spouses.  (Typically, women hiding purchases from their husbands.)  Obviously, this benefits the seller – get the purchaser to spend a whole bunch of money. Who cares if it doesn’t fit the family budget?  The seller doesn’t care – they just want to make more money.

Sellers will offer to edit receipts (note – I have also see this sign in bike shops, though I interpreted those as a joke) or include a card indicating that the item was won, not purchased.  The general idea here is that your partner will never know how much money you truly spent.

This is a terrible idea.

While there are many different ways that couples choose to manage their finances, any time someone feels the need to hide a purchase from their partner, there is a problem with the situation.  (Of course, this doesn’t apply to hiding a gift purchased for a partner.)

There are many different ways to handle your finances in a relationship.  Some people combine all of their finances.  Some keep joint accounts for family expenses and separate accounts for personal spending.  Some choose to keep all accounts separate and separate the bills and expenses.  Still others handle things in another method not mentioned here.

In many of these methods, partners have a deal that family money is family money and personal money is personal money.  And personal money can be spent however you want.  People in these situations probably aren’t the ones looking for edited receipts or contest notifications.  That means that the people who need to hide purchases from their spouses are spending money they have agreed to not spend.

Don’t get me wrong – I splurge sometimes.  This week, I had a rough week and I engaged in some retail therapy.  But I made sure that the money I was spending was money that I had – and I’m not hiding it from my partner.  Yes, it required moving things around in my personal budget.  But it wasn’t a problem.

When spending needs to be hidden, it is becoming a problem.  It is quite easy to spend too much money with a few clicks of a mouse and typing in your credit card numbers.  It is better to spend within your budget and if you’re thinking about buying something you will later need to hide, stop, close your browser, and walk away.