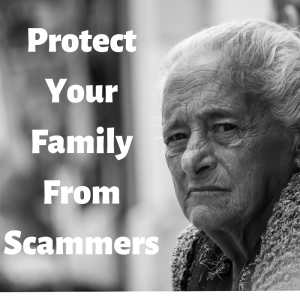 This week, I was talking with a friend who was telling me that her mother was recently targeted by scammers.  She received a phone call from someone claiming to be her grandson, who is away at college.  According to the story, he had been arrested for something he didn’t do, but he needed bail money to get out so that he could get to class.  He needed $500.

Of course, Grandma didn’t have $500 available, but she did have a credit card.  So “her grandson” told her to go down to Target and get $500 in gift cards, which they would accept as bail money.

She swears that the scammers were able to imitate her grandson’s voice, so Grandma went down to Target and bought $500 in gift cards.  Thankfully, she didn’t keep this plan to herself.  She told her husband, who was convinced it was a scam, and told her to call her son (her grandson’s dad).  Her son knew nothing of this, but called his son.  As you probably expect, the grandson knew nothing of this and was at school and not in any trouble at all.

Not everyone is so lucky.  These sorts of scams happen all the time, preying on older folks who might not be as savvy and who want nothing more than to ensure that their grandchildren are safe.

I have two tips to help your family avoid these sorts of scams.

First, warn your family that these sorts of scams exist.  Talk to parents and grandparents.  Warn them that people will imitate their grandchildren or other family members and try to get money out of them.  They shouldn’t believe these calls.  Instead, they should hang up and try to get in touch with the person who allegedly called them.  Find out what’s really going on.

Second, because even with the warnings, people still fall for these scams, set up a code word.  Even though it is highly unlikely you will ever need it, decide on a code word or phrase that you and your family will use to prove who you are.  Make it something easy, like the name of Grandma’s dog (unless it’s something obvious like Fluffy or Fido) or Grandpa’s favorite joke or the weird jello recipe she insists on making for every family dinner.  Something that no grandkid is going to forget.  So when she says “Prove it’s you.  What’s my favorite recipe,” and the person doesn’t respond “Celery and carrots in lime jello,” she will know it’s not them.

These scams have been happening for years, and people continue to fall for them.  Help protect the older people in your life and make sure they’re aware of these scams and how to not fall for them.