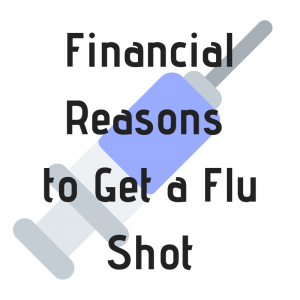 Flu Season is upon us.  Have you gotten a flu shot?  Why not?

Some people do have valid reasons to avoid the flu shot – they may be immunosuppressed, have had a bad reaction to the shot before, or have other conditions that have lead their doctors to tell them they can’t get a flu shot.  This is not common – most adults can and should get a flu shot.

How Much Does a Flu Shot Cost?

If you have insurance, the odds are good that you can get a flu shot for no cost or a very minimal cost.  And you don’t need to go to your doctor for the shot.  Many drugstores (such as CVS and Walgreens) and stores with pharmacies (like Target and grocery stores) offer flu shot clinics that will accept your insurance.

Some of these places even offer a bonus if you get your flu shot there.  For example, I got my flu shot at CVS, it was entirely covered by my insurance, and I got a $5 CVS coupon.

But what if you don’t have insurance or your insurance doesn’t cover the flu shot?

Many county health departments offer free flu shot clinics.  Check to see if you can get a free or low cost flu shot through your county.

I did some research to find out what a flu shot costs without insurance.  In my area, most flu shots cost either $45 or $50, but I did find a few places offering them for around $30.  I know, $30 isn’t exactly nothing, especially when you haven’t budgeted for a flu shot.  But it may still be worth it.

What is the cost of getting the flu?

Have you ever had the flu?  It’s no joke.  If you’re lucky, you’re just laid up at home for a few days, feeling like garbage, but eventually your immune system takes care of it.  If you have a case that’s bad enough, you might need to see a doctor.  And some people end up hospitalized with the flu.

Let’s say you’re on the lucky side and just end up laid up on the couch for a couple of days.  Do you get paid sick leave?  Otherwise, that’s an expensive illness right there.  If you do, you still might want to get some cold and flu medications, and it’s not hard to spend a pretty penny on that.  Plus I don’t know about you, but when I’m down with the flu, I often end up ordering in food.  The local Chinese restaurant makes some amazing soup that always helps me feel better.

What if you’re sick enough that you have to go to the doctor and get some medication to help shorten your flu?  Do you have a copay for a doctor’s visit?  How about for your prescriptions?  Definitely not cheap.

And then there’s the scenario where you end up hospitalized.  No matter whether or not you have insurance, hospitalization is never inexpensive.

But one year, I had a flu shot and got the flu anyway.

Can you still get the flu after having had a flu shot?  Yes.  It’s not common, but it does happen.  However, even if you do get the flu, you will likely have a much lesser case of it if you have had a flu shot.

I have had the flu once.  I was sick for only about two days, but I don’t think I have ever felt so awful.  I couldn’t even move from the couch.  And I was lucky to have a job with a good sick leave policy.  All money aside, I really don’t want to experience that again.  And i can’t imagine what it would have been like had it lasted longer.

Get Your Flu Shot

Protect yourself this flu season and get your flu shot.  Do it for your health and for your wallet.

And of course, for all those people out there who can’t get a flu shot.  We all benefit from a healthy society.