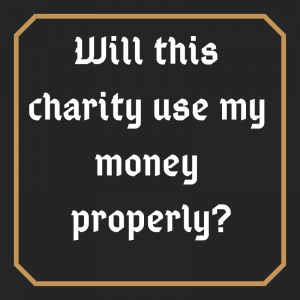 With the holiday season and the end of year approaching, you’ve probably noticed an uptick in requests from charities.  It seems like everyone’s looking for a donation right now – and it is true that charities rely on donations to do their work.

Simple – you do some research.

Where to Research a Charity

I recommend you start with Charity Navigator.  Charity Navigator is an organization that evaluates charities, both large and small, scores them, and shares the basic information you need to help determine whether that charity is worthy of your donation.  They don’t evaluate every single charity – for example, they don’t score charities with less than $1 million in total revenue.  And there are plenty of smaller charities (the food pantry in my home town, for example) doing great work.  For those, you’re going to have to do some additional research.

I especially like to use Charity Navigator when I have a particular cause I want to donate to, but I’m not sure who will best use my money.  The site is especially helpful when it comes to current events.  When a crisis happens in the world, people often want to donate.  Charity Navigator has a “Hot Topics” section.  At the time this post was published, a wildfire was destroying parts of California.  Charity Navigator offered a list of ten highly rated charities doing relief work related to this disaster.  Of course, as with any subject, I will still do my research before choosing a charity, but it’s a great first step, rather than risking sending my money to someone not actually able to best use the money.

Make Sure You Know Who You’re Donating To

Some charities seem to use a bit of trickery.   Just remember that not every charity with a similar name has similar ratings.  For example, right now on Charity Navigator, the American Red Cross has a three star review.  Not bad.  However, a charity called the American Red Cross of Seattle turns out to not be a registered charity at all, but is still soliciting donations from the public.  They’re currently being sued by the state Attorney General, and there are allegations of ties to organized crime.

Who knew, right?  I would have automatically assumed it was simply a branch of the American Red Cross.

What if My Charity Isn’t Rated?

If your charity isn’t on Charity Navigator, do some extra research online.  Look for news articles about the charity.  You can search the IRS to find out if the organization is a registered charity.  You can do the same  search for Canadian charities and UK charities.  If it’s a small local charity, ask around.  You’d be surprised what sort of information people will share over a cup of coffee.

I often feel pulled to donate to charities, but I’m not made of money.  So when I do donate, I make sure that my money is going to the right place, where it will be used for the cause I want to support.

It’s easy to do a little bit of research so I can feel confident that my donation is being used to the fullest.