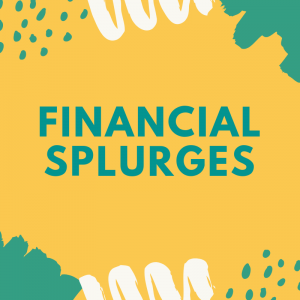 If you’re reading personal finance blogs, you’re probably someone who pays a lot of attention to your money.  Maybe you’ve been budgeting for a long time, maybe you’re just trying to get your finances in order.  But when you’ve spent that much time paying attention to where every dollar goes and making sure you’re putting the maximum into savings, it can be hard to justify a splurge purchase.

I have long been an advocate of “fun money.”  Every budget needs a little fun money.  Even if you’re working to dig yourself out of debt, I think it’s important to set aside at least a few dollars for something fun every month.  Maybe you make a point to go to a movie every month or you want to have a Netflix account.  Maybe you have a bit more room in your budget and can set aside $25 or $50 for fun, unnecessary purchases.

The point of fun money, to me anyway, is that by having room in your budget for these fun, unnecessary expenses, you will be less likely to get frustrated by the saving process and spend way outside of your budget.  For example, let’s say you’ve been putting aside every spare dollar you have to pay down your credit card debt.  And then one day, you have a bad day and you say “forget it, I’ve been good about my savings, I’m going to treat myself today,” and suddenly you’ve gone and spent an unplanned $100.  If you had $25 set aside in fun money, you could have gone and spent that on your fun expenses and not hurt the budget, but instead, by being so strict with yourself, you hit a wall and fell off the wagon.

To me, a financial splurge is different, and it’s something I struggle with.  This is a bigger purchase, something definitely outside of your normal budget.  You have the money for the financial splurge, but you’re apprehensive about spending the money.  After all, you’ve been working so hard to save and only spend on the important things.  Should you really spend the money on something fun?

For me, a recent splurge was a $600 watch.  It was something I had been looking at and researching for over six months.  I very much wanted this watch.  But I waited, because it seemed like a lot of money to be spending.

You know what, friends?  I bought the watch.  And the splurge was absolutely worth it.  I have worn that watch every day and I love it just as much as I did when I bought it a few months ago and can see myself wearing it for years to come.  This certainly isn’t the sort of expense that I could afford every month or even every few months, but as a rare financial splurge, it was worth it.

Now, there are some important keys here.  I had the money available.  I didn’t go into debt to make this purchase.  And it wasn’t an arbitrary or spur of the moment thing – it was something that I had seriously considered.  But it was also absolutely not something I needed.  It was a complete splurge, for fun.

And the thing is, I’ve found that letting myself splurge has made my budgeting stronger.  I find myself saying “Do I really need to spend that $20, or can I just save it?  I did just spend all that money recently, after all.”

So don’t keep a death grip on your money.  Allow yourself to have some fun with it.