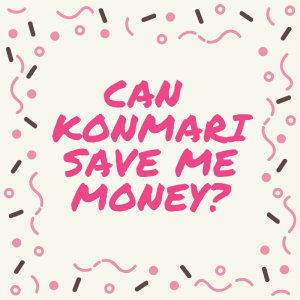 A few years ago, a professional organizer from Japan named Marie Kondo wrote a book called The Life-Changing Magic of Tidying Up.  I read the book and implemented some of her methods in my life. then moved on.

However, with the release of the Netflix special featuring Marie Kondo, the KonMari method is experiencing a resurgence.  I have only watched the first few episodes, but it made me think: how can KonMari save me money?

The KonMari method is a very specific tidying method invented by Marie Kondo.  Her theory is that you should only keep things that “spark joy.”  (I have heard that this is the best translation from Japanese to English, but it’s not quite perfect.)  For clothing, this might mean that you only keep things that make you feel good.

Of course, if you wear a uniform to work, you have to keep that too, even if it doesn’t spark joy.  (The theory here is either that you enjoy your work or you enjoy the benefits your work brings you, so the uniform is part of something that sparks joy.)

KonMari has you go through your items in a specific order so that you save the sentimental things for last, since that will be the hardest.  But what I liked about the show was that Marie Kondo explained that sometimes you have to alter the rules to make them work for you.

I’ve often felt like I have too much stuff, but when I look into minimalism, I get overwhelmed.  I don’t want to get rid of that much stuff just for the sake of having less stuff.  Another thing I like about Marie Kondo is that she doesn’t limit you to a specific number of things.  She has said that 25 books are right for her (something that caused outcry on social media), but if you have a library, that’s okay too.  She does say that your items should fit your space – so if you don’t have a place to put all your things, you likely need to reduce the number of things you have.  But if you have the room, keep the things, but only the things that truly spark joy.

One bit of her method is that if you decide to get rid of something, you should thank it. I thought this was corny, until I saw it in action.  Let’s say you have a little figurine that your grandmother gave you.  It’s really not your style, but you have kept it because it was a gift from your grandmother.  KonMari says that the joy of the gift has already occurred – it happened in the giving and receiving.  You can appreciate it for that moment of joy and still let it go, for someone else to find joy in it.  You acknowledge the emotion and then move on.

How can KonMari save me money?

How many times have you bought something only to bring it home and find you already have that item?  I know I do it regularly at the grocery store.  Thankfully, it’s typically with non-perishables so that the items don’t go to waste, but it’s still an expense I don’t need.  Personally, I hate clothing shopping, so this is a rare event with clothing, but I know plenty of people who find they buy exceptionally similar items without realizing it.

If you not only know what you have but only keep things that you regularly use, you will be less likely to spend money buying items that you already have or you don’t need.  It seems obvious, but it’s true, and it’s something many of us struggle with.

And of course, if you’re going to be getting rid of things, you may be able to sell them. Just this week, I pulled a number of items out of my closet.  Most are going to be donated, but I had a few items in new or like-new condition that I decided to list for sale on Poshmark.  If they sell, great.  If they don’t, I’ll donate them later in the year.

Where do I start?

I recommend starting with the book or the Netflix series to get an idea of how the method works, but then start looking at your clothes.  What have you kept even though you don’t really love it?  Look at everything, from your fanciest items to your rattiest socks.  You might be surprised how easy it is to get rid of things you’ve kept for far too long.

Have you tried the KonMari method?  What has worked for you?  What didn’t?