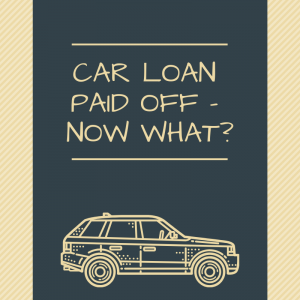 After taking a hard look at my finances at the end of 2018, I decided that I would take money out of my savings account to finally pay off my car loan.  If I continued with my accelerated payment schedule, I would have paid it off over the summer, but I decided I just wanted to be done with it.  So I made the final payment the first week of January.  I made the payment online, and confirmed over the next few days that my loan balance was now $0.

And then I heard absolutely nothing from the bank.  So I started doing research as to what happens next.  Did I have to do something?  Did I need to go into the bank?  I had gotten the loan through the dealership, so this was the only account I had with this particular bank.  Their phone system was no help – entirely automated with no way to speak to a representative.  (Let me tell you, that helped guarantee that I wasn’t going to open an account with this bank.)

Finally, after a few weeks of no contact, I emailed the “personal banker” listed in my online account, asking what the next steps were.

And I heard nothing.

Finally, this past week, I received an envelope from the bank.  Inside was the paperwork I was waiting for (dated the day after I sent my email, indicating that yes, pinging them was the right thing to do).

So here’s what I learned.  What happens when you pay off your car loan depends on what state you live in, which is why I struggled to find information.

In many states, the bank will send you a signed Certificate of Title, indicating the lien on your car has been released.  To have the lien officially removed from the system, you have to present the released title to your state’s department of motor vehicles.  In some states, that means you have to take the title into the office, in others, you have the option to mail it in.

These states make it quite easy for the car owner.  The bank sends a notice to the state indicating that the electronic lien has been removed at which point the state will issue a new title to the owner.

Florida is similar, but requires an extra step from the vehicle owner.  The bank sends a notice to the state indicating that the electronic lien has been removed.  To get a copy of the title, the owner has to contact the DMV.

Of course, I live in the state with the most complicated rules.  That said, I have all of the paperwork I need, now I just need to decide if I trust the mail or if I want to go into the MVA and wait in line.  Either way, the car is now officially mine and that’s one less debt I have outstanding.