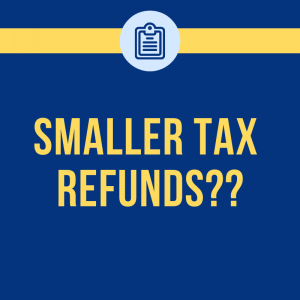 Okay, to be honest, I actually enjoy the process of doing my taxes.  I like sitting down and seeing how the numbers fall out, and how well I estimated my withholdings.  My goal is always to break even, meaning that I don’t get a huge refund, but I don’t owe a large amount either.

What is a tax refund?

For a lot of people, however, they plan for and look forward to a large tax refund.  Last year, the average tax refund was $2825.  That is a good chunk of money!  I would love to have an extra $2825 in my budget right now!

But let’s think about what a tax refund really is.  While it feels like free money, it’s not.  It’s actually your money that you overpaid the government.  You could have had that $2825 throughout the year, rather than letting the government hold onto it for you.  It just doesn’t feel as exciting.  Let’s say you get paid every other week.  $2825 divided by 26 weeks is $108.65 a paycheck.  If you had an extra $100 every paycheck, what could you do with that?  Yes, you could just put it into a savings account and have the same “bonus” to spend come tax time (plus interest).  You could use it on your regular expenses.  You could put it towards paying down debts.

I know plenty of people who say “Yeah, I would just waste that money throughout the year.  The tax refund means that I can do a big project on my house every spring.”  While I would rather have the money in my pocket, I understand that reasoning.  I would instead suggest automatically having $100 from each paycheck pulled into a separate savings account to make that money harder to access, but I know that not everyone is great at budgeting.

Because I try to break even every year, that means that I’m not giving the government an interest free loan, but I also don’t end up owing a lot of money.  I usually fail at this and end up owing money, but not so much that it’s painful.  I do set aside a bit of money every month to prepare for tax season (I have untaxed income from investments and freelance work), and whatever’s left in there after my taxes are done gets put back into my budget. It’s like my own little tax refund.

Why are tax refunds smaller this year?

Many people who have already started filing their taxes are noticing that their refunds are smaller this year.  Based on data from the first week of February, tax refunds were down 8.4% as compared to this time last year.  Typically, the people who get their tax returns in the earliest are the people who are depending on that large refund.  If we apply that to the average tax return from last year, that’s a $237 drop.  That’s not insignificant.

So what happened?  The tax laws changed.

Last year, the administration announced some big tax cuts.  This included changes to the withholding tables.  You may have noticed this year that your paycheck got a little bit bigger.  That’s because less money is being withheld from your paycheck.  The goal here is to get the money into your pocket right away, rather than have the government hold onto it until tax season.  In general, this is a good thing, unless you were relying on that big refund.

There were other changes too.  For example, there is now a cap on property and state income taxes, so if you live in an area with high taxes, you may not be able to deduct the entire amount that you paid.

Will fewer people get a refund?

While that remains to be seen, it’s a distinct possibility, especially for people like me who aim to break even or people who typically get a small refund.  I was aware of the tax law changes, but didn’t make any changes to my withholdings, mainly because I wanted to wait and see how this would affect my bottom line come tax season.  I suspect I will owe more this year than I did in the past, because I already received that money in my paycheck.

So once all the numbers have been crunched, I can go in and change my withholdings to help bring me closer to that “zero” number.  I’m lucky enough to be able to do that online through my job, but you may need to talk to your human resources department to find out what you need to do if you want to make changes as well.

Have you finished your 2018 taxes?  How does your refund compare to last year?