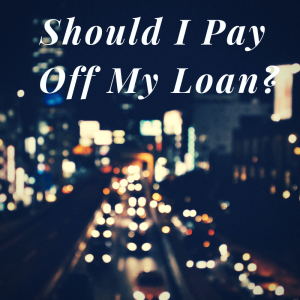 Recently, I paid off my car loan a little over a year early.  I had a couple people ask me why I made that choice.  After all, it was going to lower my credit score, right?  So wasn’t it worth it to keep the low rate and invest that money?

What Happens When You Pay Off a Loan?

When you pay off a loan, obviously, you no longer owe money on that debt.  You reduce the amount of money you have to pay every month.

Why to Not Pay a Loan Early

While your credit score might not be the big reason to hold off on paying a loan early, you still want to consider whether or not it’s worth it to make that payment.  If you have a low interest rate, you may be able to pay the minimum and invest the rest of the money in such a way that your investment makes more money than you’re paying in interest.  In that situation, you come out ahead by paying the minimum and investing the rest.

You certainly don’t want to pay off a loan early if you will deplete your savings account to do so.  It’s important to always have some money set aside in case of emergencies.  If you don’t have an emergency fund, your money is best used creating one, then working to pay off your loan.

Why to Pay a Loan Early

Paying a loan early eliminates one of your monthly payments.  You don’t have to worry about late payments.  You’re freeing up some money for other expenses.  And ultimately, depending on the terms of the loan, you will also end up paying less money in interest.

If you’re not big into investing or the interest rate is higher than the rate of return you might otherwise get, it’s financially a better idea to pay off the loan now.

Yes, your credit score may take a tiny hit, but if you’re not planning to take out any loans soon, you will recover from that score drop before you need your “good” credit score again.

In my situation, the biggest reason was entirely mental and emotional.  Paying my car loan was just one more bill I had to think about every month.  I just felt better about my financial situation not having to worry about the payment.  I had received some extra money and it felt like a good use.  Sure, I could have used the money for something more fun, but I felt a lot of satisfaction getting the car paid off and getting the title cleared so it’s finally mine.

So What Should I Do?

While there are some situations where there is an obvious pro or con to paying off your loan early (high interest rate or no savings), in most cases, it’s really up to you.  If you would feel better having one less debt to your name, pay it off.  If you don’t mind the payments and have another good use for the money, keep making the monthly payments.  Either way, as long as you’re making your minimum payments and keeping up to date with the loan, you’re doing the right thing.