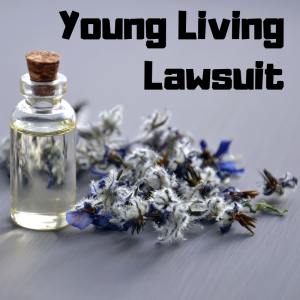 This month, Young Living was served with a class action lawsuit alleging that they are an illegal pyramid scheme.  From all I have heard about Young Living, I can’t say I’m surprised.  While I’m a big fan of essential oils, I don’t like the high prices, predatory marketing, and completely false medical claims that I’ve seen coming out of Young Living.

So how do Young Living consultants make money?  Like most MLMs, consultants are required to purchase a starter kit (available for as low as $100).  Then they can earn commission based on any sales they make (as well as through recruiting, which I will discuss later).  However, to be eligible for commission, they must also make at least $100 in purchases every month, also known as PV (personal volume).  The theory is that since they are buying this PV at a 24% discount, they can resell it and make a profit.  However, there is little incentive to do so, as they aren’t earning a commission on this, and neither is their team.  That means that to stay an active member simply eligible for a commission, they must spend $100 each month.

The most shocking part of all of this that I learned from this lawsuit is that if a consultant doesn’t make $25 in commissions in a month, she doesn’t get paid.  Instead, she gets a credit to buy more product.  This leads consultants to push for signing up new members rather than selling product.

Of course, each of those new consultants has to be spending $100 a month to become active, and that’s where we come into the Amway rule.

In 1979, the FTC ruled that Amway was not a pyramid scheme because it required that its consultants show proof that they resold at least 70% of the product they bought and that only 30% was for personal use.  This rule is designed to prevent consultants from staying active simply by purchasing more and more product for their own use.

The problem is that Young Living doesn’t seem to be following this rule.  Yes, its policies let the consultants know about this rule, but there is zero enforcement.  Additionally, bottles of essential oils are small and easy to store.  Thousands of dollars worth of product would easily fit in a large storage tote.

While all MLMs have some sort of sales requirement for their consultants if they want to receive commissions, often times, that is in the form of total sales.  They must sell X amount of product to their customers.  Yes, this does lead some to buy themselves under another person’s name, but at least the MLM isn’t actively encouraging it.

Here, Young Living is actively forcing its customers to buy $100 worth of products a month, under the guise that they should be reselling.  But let’s be honest, how many of us are buying at home parties or from someone who is bringing over a bag of product?  No, most of us are doing much of our ordering online.  It’s clear from all of the Facebook and Instagram accounts dedicated to selling these products.

Well, courts move slowly.  Young Living will be given a chance to respond.  If the case continues to trial, I’d expect the process to last around a year.  I will definitely be keeping my eyes on this case.  Young Living appears to be one of the more egregious cases of predatory MLM behavior, and I look forward to seeing what happens next.