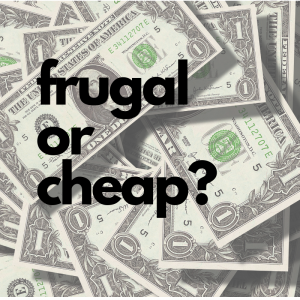 I saw an interesting phrase recently.

Being frugal impacts you.  Being cheap impacts those around you.

Sometimes, it’s hard to figure out where the line is in saving money.  For some people, it can become slightly addictive.  How much money can you save?  How can you avoid spending money?

But where do you draw the line?

I think we can all come up with situations where someone is being cheap and impacting someone else.  Going to a potluck and conveniently forgetting food.  Never contributing money to office celebrations yet always participating.  Letting others always pick up the tab.

But what other situations could be considered cheap rather than frugal?

When you go out to eat, do you leave a tip?  Do you leave what others would consider a reasonable tip, or are you just rounding up to the next dollar and leaving the server a few cents?   Your failure to tip is affecting that server, and thus, it’s cheap.

When there are events with food around the office, do you always take extras for later, even before others have had a single serving?  Once everyone has eaten and the leftovers are available for anyone, do you take enough for a meal for later, or do you stock up so you have enough to feed yourself for the week?  If you’re taking food from someone else, that’s cheap.  (If no one else wants it though, I’d call it frugal, because otherwise, it’s wasteful.)

Here’s one that may be controversial: Do you never go out with friends?  I don’t mean to fancy dinners – not everyone wants to spend their money on a fancy meal.  I mean out for drinks or to a trivia night.  Something where you could enjoy the evening without spending $10.  Do you avoid those situations because you don’t want to spend money?  There’s a distinct possibility you’re being cheap.  (Of course, if you legitimately don’t have the cash, that’s a different story.)

I know a lot of people who are big couponers, and people who drive old, beat up cars.  I know people who grow large gardens and can a lot of food for the winter.  None of this is what I would consider cheap.  It’s a frugal lifestyle and a way to save money.  And for many of them, it’s a way to save money on other things they find important.

You can live frugally in some areas and spend in others.  Growing up, my grandparents lived quite frugally, re-using pretty much everything, comparison shopping, and repairing things rather than replacing.  They also took fabulous vacations and were able to see the world.  They saved on their everyday expenses so they could spend their money on what was important to them – travel.  Now, I’m not saying you have to save your money for travel.  Maybe going to a fancy restaurant every month is important to you.  Maybe you like nice cars or have an expensive hobby.  It’s okay to be frugal in some areas.

However, it’s never okay to be cheap in some areas and spend in others.  If you are taking advantage of other people so that you can spend your money on your expensive hobbies, you’re just being a jerk.  Frugal is okay.  Cheap is not.