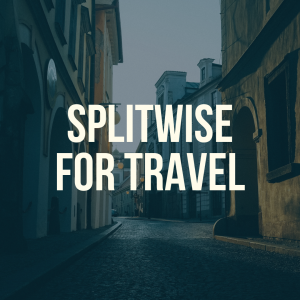 I’ve been told this is very “millennial” of me, but I’m a big fan of splitting expenses evenly when mixing friends and finances.  I just think it’s easier that way – then no one feels like they’re being forced to pay an unfair amount.  Sure, sometimes when I go out to dinner with a friend, we just split the bill down the middle or with very close friends, we just take turns paying, but when it comes to group things, I just like things to all be fair.

In the past, traveling with friends was a bit of a hassle.  Typically, one person would run a spreadsheet of expenses and everyone would email that person what they spent.  Then that poor person (who was never me) would do the math, figure out who owed what to who, and everyone would pay their part.  It was complicated.  Then we discovered the Splitwise app.

Splitwise – How Does It Work?

Basically, Splitwise does exactly what my friend’s spreadsheet did, only better.

You setup a group in Splitwise and invite the travelers.  Then, as group expenses are made, you input the expense and who it benefitted.  (So if you’re traveling in a group of six, but one night, only 4 of you get tickets to a show, the cost for that show is only applied to those 4 people.)  Splitwise keeps a running total of what each person owes and who that money is owed to.  You can then settle up through the app via Paypal or Venmo, or you can do it outside the app, whatever you prefer.

I love this method.  It’s incredibly transparent and no one ends up spending more than their fair share.  No one gets frustrated because they picked up all the groceries for the condo and didn’t get paid back.  No one feels like they paid too much because they had to pay for a part of the trip she didn’t participate in.  Another perk is that it helps us figure out who should pay when a bill comes at the end of the night.  If I owe money to a friend, I can offer to pick up her tab one night, enter that into Splitwise and reduce the money that I owe her.

Why use an app?

While you could figure this all out yourself, what I like is that it’s bringing in an outside expert to tell you what is fair and equitable.  It takes the emotion out of it.  Money can cause all sorts of headaches in friendships and relationships.  By using Splitwise, that emotional side gets taken out of the equation and everyone pays their fair share.