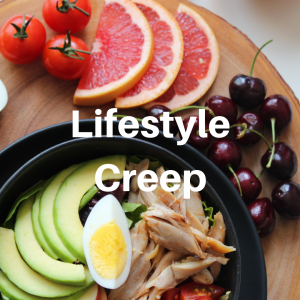 Lifestyle creep happens when you start making more money and instead of saving that extra money, you increase your spending in other areas.  Maybe you start eating out more, or you subscribe to a new streaming service.  Basically, things that were once luxuries are now a regular part of your budget.

But lifestyle creep doesn’t always happen when you’ve increased your income.  Maybe you’ve reduced your expenses elsewhere.  Perhaps you’ve paid off a loan and now have more money “left over” at the end of the month.  The key to lifestyle creep is that you find yourself easily spending money on things that previously would have been rarities.

Why does lifestyle creep happen?

Let’s be honest, who wouldn’t love a bit more discretionary money every month?  Being able to eat out whenever you want, buy the expensive groceries, sign up for that new streaming service, buy that cute pair of shoes in the store, these are all great feelings.  And when you’re living on a tight budget, it’s easy to say no to those things.  You know the money you have available to spend, and if the shoes aren’t in the budget, they’re staying in the store.

When you have a bit more money to spend, maybe going out to eat won’t put you into debt.  So you splurge.  And soon enough, those splurges become more and more commonplace.  But it’s okay because you’re not going into debt. You’re paying off your credit cards every month.  So it’s not a problem, right?

It’s not a problem, but…

The issue with lifestyle creep is that you can shortchange yourself.  Your long term goals will suffer because you’re spending your money on the here and now instead of saving.

Now that’s not to say that you shouldn’t treat yourself.  By all means, I absolutely think that you should treat yourself within your means.  And if you do get a good raise, maybe you can add another night out into your monthly budget.  But add one night out, not four.  Instead of just thinking “Oh great, I have an extra $x to spend every month,” consider saving the majority of that money.  Put it towards a long term goal.  I always think you should increase your retirement savings, but assuming you’re already doing that, maybe you just want to save towards a dream vacation.  This doesn’t have to be a boring old savings goal.

How to identify lifestyle creep

You know where this is going.  Take a look at your budget. If you don’t have a budget, try to figure out your monthly expenditures and put them into categories.  Are you surprised by any of those numbers?  Are you spending way more than you thought at the grocery store?  How about dining out or entertainment?  Then you need to make a decision.  Is it worth it to you to be spending that much in those areas?  Or would you rather reign it in and set up some longer term savings goals?

I’ve not really received an increase in my income recently, but I have had some expenses change following a minor accident (money going towards racing and travel is now remaining in my pocket).  But instead of putting that money away for the future, I’ve found that I’m splurging in areas I wouldn’t normally.  Of course, this money was earmarked for “fun,” but I’m finding myself just randomly buying things because I can, things that I would normally have thought about for a longer period of time.  There are definitely better uses for this money.

I’m not saying you shouldn’t have fun with your money, and if you have more money available to you, you can absolutely take advantage of that, but make sure you’re being reasonable.  Spend some, save some, and make sure those expenses are worth it.