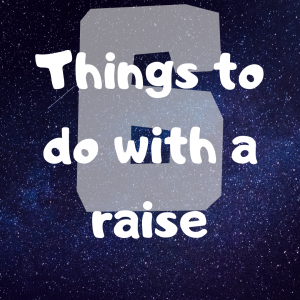 This week, I found out that I’m getting a raise at work.  I’m pretty excited, not only for the money, but because all the extra work I’ve been doing is being recognized.  I’m not sure how much the raise will be after taxes, but it will definitely make a difference in my bottom line.  Of course, my first thought was “Cool, what fun things can I do with this money?”  And that is the wrong thing to do.

In my case, this means increasing the money going into my 401(k).  Of course, since I contribute a percentage of my paycheck already, my contribution will automatically increase, but I’m going to bump it up a percent or two.

In my case, my only current debt is my mortgage, and I’m not going to change my payments there (more on that later) but in general, that’s my second recommendation.

My emergency fund took a hit again this year when I crashed my bike and landed in the hospital, so it’s time to build that back up.  While I’m still frustrated by all of the medical bills, I’m so lucky that thanks to insurance and savings, I didn’t end up in debt.

I want to be able to do more traveling, and for that, I’d like to have some money set aside so that when a fun trip opportunity comes up, I can jump on it.  I’m a big fan of spending money on experiences, and there are so many places I would like to visit.  So I’m going to start putting money aside every month for a vacation fund.

This and the vacation fund are probably equal in priority.  I’ve used my emergency fund in recent years to pay for major home repairs (new roof, new air conditioner), but having lived in my house 7 years, there are some big projects I’d like to tackle, and for that, I’m going to need some money set aside. Some of the things are small, like replacing the washer and dryer.  Others are big, like replacing the windows.

6. Have a little bit of fun

Though I suppose you could argue that my vacation fund is fun, I’m also going to allow a little bit of lifestyle creep.  I’m pretty frugal when it comes to clothes shopping and dining out, and I’d like to let myself splurge a little bit in those areas.  Maybe an additional $50 a month, nothing that will break the budget, but just a little bit of treating myself.