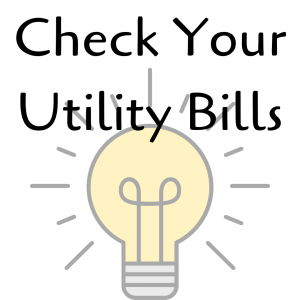 This past month, a friend of mine had a major water main problem at his home.  It turns out a small pipe had been leaking for quite some time and finally those small cracks turned into a large break, ending with water gushing into his basement.  This caused significant damage and required some extensive repairs.

Unfortunately, it turns out this is something he could have caught much earlier.

While we can’t spend our time inspecting all of the pipes inside our walls, there is one way we can check the health of those pipes – our water bills. It’s important to always check your utility bills to try and head off problems before they become disasters.

Look At Your Water Bills

In general, if you’re not making major changes to your home (installing a pool or a sprinkler system, for example), your water bills should stay relatively the same throughout the year.  Sure, if you water your lawn in the summer months, you may see an increase, but then you can compare those numbers to the same months the previous year.

My water bill comes quarterly, so it’s a bit harder to compare, but I always look back at previous bills and compare the water usage, and it’s relatively stable.

It turns out my friend had noticed an increase in his water bill, but had just paid off the money, thinking the rates were rising.  After all, it wasn’t that big of a bill.  But if he had looked closer, he would have seen that his water usage had suddenly jumped and was continuing to jump.  Why?  Because water was leaking from the pipes and into his house.

This can also be a way to see if you have a leak somewhere not in a pipe, such as a trickling toilet you haven’t noticed or a leaky sink.  Ideally, these are things you would be checking out regularly, but maybe you have a bathroom or utility sink you don’t use often.

Check Your Other Bills Too

Sudden jumps in any of your usage can be bad.  I noticed a jump in my electric bill not long before my air conditioner died.  It turns out it wasn’t pumping as efficiently, so it was running significantly more often than it needed to.  Of course, I figured it was just that the temperatures had been high, but now I know better.  I should have taken that opportunity to check out the major appliances in my house and see if I could determine whether one was running harder than I thought it should be.