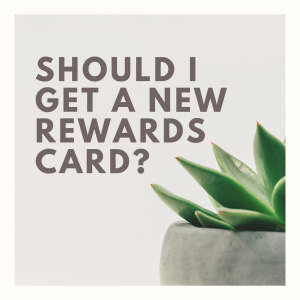 I have written here before of my love of credit card rewards. I put the majority of my expenses onto credit cards (basically every expense that won’t charge me a fee for using a card) and I pay off the cards every month.

The best way to use rewards cards

Now, I’m far from an expert card user. I have two credit cards with differing rewards. Essentially, I have one card that I use for recurring bills and another card I use for everyday expenses. The second card is an Amazon Visa, which has various categories of rewards – 3 percent at Amazon and Whole Foods, 2 percent at restaurants, gas stations, and drugstores, and 1 percent back on everything else.

Recently, I learned a trick to using these rewards that I hadn’t considered before. The Amazon rewards card allows you to spend your rewards points directly at Amazon. That was my usual method. But I realized that the better option was to get cash back, and then if I still wanted to spend that money at Amazon, I could, but I would be earning additional rewards on that cash back.

It’s so obvious, but I just didn’t see it.

Getting a New Card?

I’ve been doing a lot of traveling lately, and I found myself tempted by the Southwest Rewards card. After all, why not earn miles that I can redeem for travel.

While different rewards cards have various reviews on how easy it is to redeem those miles, the Southwest card has high marks for the ease of redemption. So that was a positive mark.

The Southwest rewards cards do all carry an annual fee, something my other cards don’t have, so that was my big sticking point. What value would I be getting for my $69, $99, or $149?

So I did my research.

What is the value of the rewards?

With a cashback rewards card, you can easily value the rewards. But what are airline miles worth? Thankfully, there are websites out there that help you value your miles. I found that the miles are worth somewhere between 1 and 2 cents per mile.

So what does that mean? Well, it means the current 40,000-mile new account bonus a pretty sweet deal. And the various cards also have yearly anniversary points, which does technically reduce your overall expense for the card itself. That’s only in the first year though. Finally, the most expensive card also offers an annual $75 credit, which also reduces that overall yearly expense.

So is it worth it?

Honestly, I haven’t decided yet if this is something I want to do. It looks like trying the card for a year might be a good deal. After that, I can make the decision as to whether or not I want to keep it. My cashback card might be my best bet. After all, it’s free.

Do you have a rewards card with an annual fee?  Have you found it worthwhile?