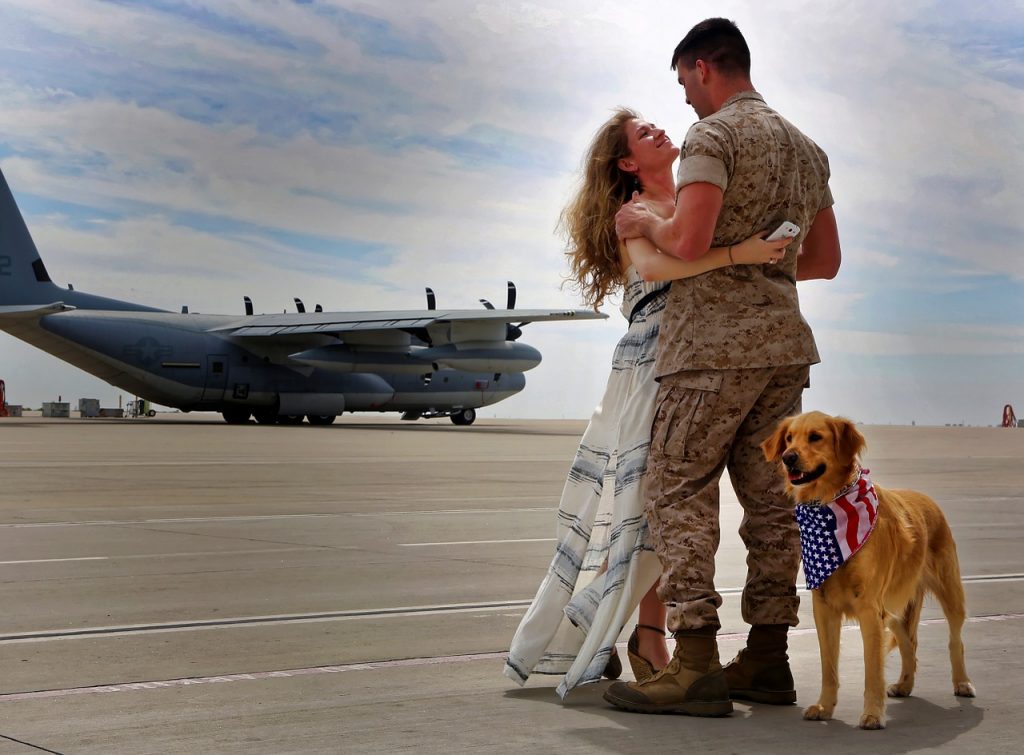 Military benefits are not just for those in uniform; military spouses and what the military calls “dependents children” are also eligible for money-saving benefits that may apply to both officer and enlisted members as well as their immediate family.

Pay And Benefits For Families

At the most basic level, those who enter the military with a family or start one after joining the Air Force, Army, Navy, Marine Corps, or Coast Guard get benefits that their unmarried counterparts do not.

The military member’s basic pay is not affected by being married. However, there are military housing allowances, education benefits, and other related issues that are definitely affected. This is true whether the service member gets married after signing up, or joins the service with a family.

The Department of Defense pays troops a housing allowance – known as Basic Allowance For Housing or BAH for short. This benefit is awarded at a different rate for single military members than for married ones.

The difference depends on the zip code where you live. A married junior enlisted military member living in Kansas City, Missouri is paid some $300 more at the “with dependents rate” than a single service member living in the same place at the same rank.

No, that benefit is not paid to the spouse or children of the service member, but it makes family budget planning a lot different. Especially during times when money is especially tight. What about the benefits that can be used by a family member?

There are a variety of education benefits open to military spouses and the children of service members. This includes the Post 9/11 GI Bill and the updated “Forever” GI Bill. Both permit the transfer of a service member’s GI Bill education benefit to a spouse or dependent. What does that mean for those non-military members who are able to use the GI Bill?

The Department of Veterans Affairs official site states, “The transferability option under the Post-9/11 GI Bill allows Servicemembers to transfer all or some unused benefits to their spouse or dependent children. The request to transfer unused GI Bill benefits to eligible dependents must be completed while serving as an active member of the Armed Forces.”

The Department of Defense has the final say over who can and cannot transfer GI Bill benefits to spouses or children. For those who do transfer once the process is approved, the student (spouse or child) is responsible for applying for the GI Bill benefit with the VA. Those who do can take advantage of the following options:

There are other education benefits offered via each branch of service that are unrelated to the GI Bill but can help spouses and children. They include:

You can get more information about these programs via the orderly room, First Sergeant, Command Sergeant Major, Senior Chief, or other unit representatives at the military base where the military member is assigned.

Other Financial Benefits Of Being A Military Spouse Or Dependent

Not all financial benefits of being married to or being the child of a military member come from the federal government. Many state governments have options to help spouses and children of soldiers, sailors, airmen, Marines, etc. Some of this help is conditional. Many states offer programs intended to help surviving family members of troops killed on duty or who died as a result of military service.

This assistance comes in the form of school scholarships, hiring preference at the state level (usually Civil Service positions or state government jobs), and even free or reduced cost licensing options for professional work that requires certifications by the state or a third party.

Are you the spouse or child of a service member? Start learning about your benefits by asking the service member. You can also contact the unit orderly room or personnel center. Be sure to ask what options are open to you based on the branch of military service, the nature of the military member’s status as an active duty, retired or separated military member, or as a member of the National Guard or Reserve.

Saving money at the grocery store without coupons.