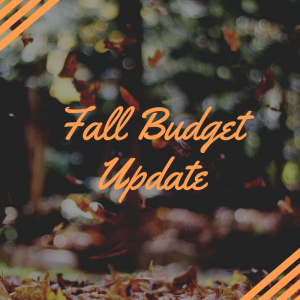 At work, we are currently in the final month of the fiscal year, so we are doing a number of budget recaps and looking at our goals for the upcoming year.  After a day of looking at my work budget, I thought it was high time I took a serious look at my personal budget as we near the final quarter of the calendar year.

I have talked here a lot about how much I love You Need a Budget, also known as YNAB.  In addition to being a great app/website, it’s also a great plan for how to manage your budget.  They have four major rules, and the fourth and final rule is to Age Your Money, meaning that you essentially live on last month’s income.  You aren’t waiting for your paychecks to come in so that you can pay your bills, because you’ve budgeted such that you’re using the money you earned last month to pay your bills this month!

Earlier this year, I made it to rule 4!  Okay, I kind of cheated by using the funds from a three paycheck month to get myself to rule 4, but I was there.  Happily living off of last month’s income.  It made budgeting so easy.  I knew what I had available to spend and I didn’t have to worry about when my paychecks were going to get deposited.

I’m hearing some past tense there

Yes, you noticed that word “was.”  I am no longer at Rule 4.  I’m not quite to the point where I have to wait for my paychecks to deposit before I am paying my bills, but I don’t make it through a full month on last month’s income.

A myriad of things.  Some of it was just unplanned expenses  I had some unexpected dental work and needed some work on my air conditioning.

But I can’t blame unplanned expenses for all of it.  Over the past two months, I’ve also spent quite a bit on vacation expenses and dining out.  Admittedly, much of the vacation expenses are for trips in the future (plane tickets for upcoming trips and a hotel room that I had to pre-pay), so it’s not like I’ve just been gallivanting around the country the past two months.  I need to be better about putting aside money for vacations every month so this kind of budget issue doesn’t happen.

Wait, couldn’t you use your emergency fund for some of that?

Why?  Because I know myself.  I’m much better about prioritizing something like Rule 4 than setting money aside for my emergency fund.  I know, as a personal finance writer I should be better about keeping a stocked emergency fund, but I have learned over the years that it’s harder for me to prioritize.  So I use other tricks to make sure my money is where it should be.

Do you have budget tricks you use?

Do you have any mind tricks you play on yourself to keep your budget where you want it?