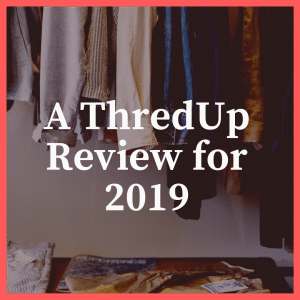 Obviously, I’m a huge fan of donating as much as possible, and there are a few local charities that will pick up stuff from my house – that’s my favorite way to get rid of things.  It’s super easy, and having a scheduled pick-up date means that I will get the work done.

However, sometimes I want to try to get a bit of money for the items I’m getting rid of.  I’ve used various selling sites, but I will be honest – I don’t have the time or desire to keep up a Poshmark account or an eBay account.  I like to just get rid of things quickly.

ThredUp is a marketplace for used clothing, mainly women’s and children’s clothing.  To sell on ThredUp, you just order a Clean Out bag, load it up, and send it back, free of charge.  They go through the bag, decide what they can and can’t sell, and donate the rest.  If you want to get back the items they don’t accept, you can do that for a fee.  Personally, I’ve never used that option.

It used to be that ThredUp would offer a payout based on the items you sent in.  Occasionally, items would be put on consignment, meaning that you only got paid if they sold.  It was a great system – instant payout for your items.

Now, all of ThredUp’s items go on consignment.

This is good and bad.  On one hand, when items go on consignment, you get to control the price.  Is ThredUp selling for too low?  Too high?  Change the price, and thus change the percentage you’re making on the item.  If an item isn’t selling as quickly as you would like, drop the price.

But of course, there are bad sides to this as well.  ThredUp only keeps items on consignment for 90 days. That means if your item doesn’t sell in 90 days, no money for you.  And that doesn’t mean you’re getting the item back or it’s getting donated.  No, ThredUp can still sell it, but they can keep whatever money they make.

Now this is only conjecture, but I have read in multiple places that ThredUp is accepting fewer items for consignment.  Items that previously would have been accepted are no longer being accepted.  But that doesn’t mean that ThredUp isn’t keeping them.  These items have been seen in ThredUp’s subscription-style boxes and sometimes appearing like a normal item on the site – just without a consignment payout to the original owner.

Now, this is something that you essentially agree to when you send to ThredUp.  Unless you pay the money (currently under $15) to send your items back, you just don’t know what you will get.

Is ThredUp worth it?

This is really a personal choice.  For me, the process is still really easy and one that I’m going to continue to use.  Of course, I’m not selling high-end items – mostly mid-level things that could purchased at a nice mall.  So I’m not expecting big payouts to begin with.  And the process is so incredibly easy.  I throw all the stuff in a bag and it’s gone.

I think it depends on your reasons for getting rid of the items.  For me, reason number one is to declutter.  The payout is just a bonus.  I like the simple process.  I know a lot of people who put things into ThredUp bags that they know won’t be accepted just because it’s an easy way to get rid of things without it going to a landfill (ThredUp donates those things or sells them to places that buy bulk clothing).  It’s a good feeling to just get stuff out of the house.

On the other hand, if you’re looking to make some money back for your items, you might be better off checking out a local consignment shop or using a site like Poshmark where you have more control over the sales.

Do you use ThredUp?  Have you been happy with your experience?