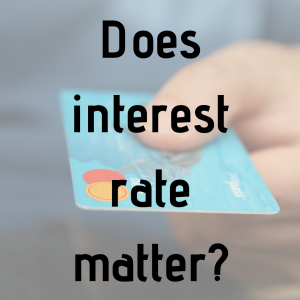 There are a lot of different credit cards out there, and they’re all trying to get your business.  Now, they don’t just allow you to pay for your purchase at a later date, they also offer a myriad of different rewards, from cash back to airline miles to purchase credits at certain stores.

But with all of those perks and rewards comes a variety of interest rates, and it tends to be that the better the rewards, the higher the interest rate.

If you pay off your credit cards ever month, does the interest rate matter?

But that’s not the whole answer.

Why the interest rate doesn’t matter.

If you pay off your credit card balance every month, you don’t pay any interest, so the interest rate doesn’t matter.  And that doesn’t mean that you charge something on your card, then immediately run home and transfer the money from your bank account to your credit card.  When your statement arrives, either electronically or in the mail, pay the full amount due on the statement (not the minimum balance) by the due date, and you won’t pay any interest.

I have to admit, I don’t know the interest rate on any of my cards.  I’m not really worried about it right now.  But maybe I should pay more attention

Life isn’t perfect.  Sometimes, things go awry.  You might find yourself in a position to not pay off your credit cards one month.  You might just forget to pay a card one month and find yourself with an interest charge (though if it’s the first time it’s happened, you can sometimes call the credit card company and beg forgiveness and get that interest charge reversed).

If possible, I recommend not putting money onto a credit card if you don’t have the money in the bank right now.  Even if you’re getting paid tomorrow, don’t charge that $100 today.  Even though you’ll have the money tomorrow, it’s just a good policy to keep yourself safe.

What about zero interest?

Now, a zero interest card is another thing.  If you get a card with, say, 12 months of no interest, that’s a pretty great deal.  If you have a large purchase to make, instead of financing it with the seller, you can put it on a zero percent interest rate card, then work to pay it off over the next 12 months.  It’s risky – that interest is still accumulating even though you don’t see it, and whatever doesn’t get paid off will have the full amount of interest for the 12 months applied at the end of the term, but if you’ve got good budgeting skills, it’s a great way to make a big purchase.