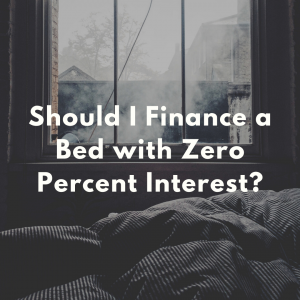 I have an ancient mattress.  It’s about 16 years old.  General wisdom says you should replace a mattress every 10 years, and I can definitely tell it’s past time on this one.  I’ve been lusting after a Sleep Number mattress for years after sleeping on one at a family member’s house, but haven’t been able to pull the trigger on the money.  Finally after a weekend away at a hotel where I slept wonderfully, I decided it was time.

Conveniently, just as I was looking to shop, they were offering a deal.  Zero percent interest for 36 months.  Breaking down the large payment into 36 monthly payments made it not seem so bad. But what is the catch?

Frequently, you see sales that offer zero percent financing for 12 months or 24 months, or in my case, 36 months.  But there has to be a catch, right?  Why would the store essentially give up all of that interest they could be earning and let you have the product before you’ve finished paying for it?

Well, one reason is that they want to make the sale.

But there is certainly a catch to zero percent financing, but it’s one you can avoid if you’re careful.

But if you’re careful and pay attention to payment dates, you should have no problem avoiding that interest charge.  In my case, I have 36 months to pay off this charge.  You’d better believe I will be paying it off in less than 36 months.  I will likely round up the monthly payment to a nice round number so that I ultimately need to make 35 or fewer payments and give myself a little buffer zone, just to be safe.

If you’re good at paying your bills and good with your money, then in my opinion, it’s a great idea!  You can make a larger purchase, break the payments down into small amounts, and not pay any interest.

Of course, you will need to be careful.  If something happens and you’re suddenly unable to pay your monthly bill, you may end up getting hit with some serious charges.  In my case, I do actually have the funds in a savings account to pay for this purchase outright – but I’m going to take advantage of the zero percent interest and try to pull the money from elsewhere in my budget, rather than hitting my savings account.  That way, if something happens one month, I’ve still got the money to make the payment, but my savings account will also continue to grow.  For me, it’s the best of both worlds.

However, if you’re not great at managing your money and you’ve let some of your bill payments slip a little bit, either due to cash flow or just because you forgot, this may not be the plan for you.  While your landlord might be okay if your rent is late one month, the terms on a payment plan like this are often very strict and if you miss a single payment, that may be enough to get you stuck with all of the interest.