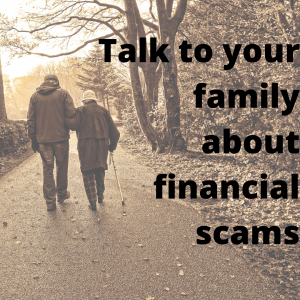 Recently, the Wall Street Journal published a great (yet horrifying) article regarding a woman who lost her life savings, over $340,000, to what began as a robocall scam.  This story has some incredible twists and turns and shows just how sophisticated these scammers are.  The scam started when someone left a message on her voicemail saying that her Social Security Number had been stolen and then used to commit a number of crimes.  To protect herself, she would need to transfer all her money out of accounts linked to that Social Security Number and over to new accounts. The FBI could help her with that.  (Of course, it wasn’t really the FBI.)  She was convinced to empty multiple accounts and transfer the funds to the scammer.  She was taught what to say to the bank tellers to avoid any suspicion.  She was even told that she couldn’t tell her family, that her phone lines were tapped, and that for safety, she needed to stay in a hotel, telling her family she was staying near work due to long hours.

The woman they targeted is an oncology nurse, well educated in her field, and she still fell for this scam.  They used quite sophisticated tactics, employing fear and isolation from friends and family to convince her she was doing the right thing.  She says they also hit her at a difficult time, with her husband battling cancer and her daughter suffering a miscarriage.  She was a perfect target.

How to Protect Your Family From Scams

This scam is a step above what we’ve been commonly seeing.  We’ve all heard of the gift card scams.  We’ve all told our family members that the IRS will never ask you to pay your bill by gift card.  But this one takes it to a new level.  They’re alleging criminal behavior and threatening jail time.  They’re convincing victims to transfer money to new bank accounts, which seems less like a scam than buying a gift card.  But most terrifyingly, they’re using some incredible tactics to keep people isolated and scared, and prevent them from hearing reason from other friends or family members.

The best way to protect your family members is to discuss this. But let’s be honest – it’s hard to look at a parent or grandparent and say “Hey, I think you’re just unsophisticated enough to fall for this.  Here’s what you should watch out for.”  That’s a really easy way to offend someone.

Instead, I recommend reading this story or one of the many others out there and talking about it with your family.  It’s much easier to say “Oh my gosh, I have to tell you about this crazy story I heard about,” than to say “I am afraid you might be a victim of this.”  It puts the idea into their head.  And of course, reminders that the IRS or the FBI will never call you and ask for these things, and they certainly wouldn’t say “Don’t tell anyone about this or you will be arrested.”  You always have the right to talk to a lawyer, even if you are being arrested.

I have been telling people about this story not because I’m worried about them being victimized but because I’m really amazed by the tactics these scammers are using.  It doesn’t take much to take it a step further and bring it up with people I know who might be at risk.

And let’s be honest – we all think we’re smart enough to not fall for something – until we do.  You never know when you might slip up, so it’s important to always be aware that these kinds of scams are out there, that people are being targeted, and we need to take care of ourselves and others.