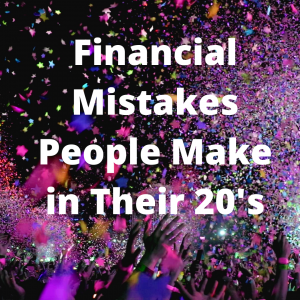 When I got my first job out of college, I was paranoid about making money mistakes, but I had no idea what I was supposed to be doing.  I certainly didn’t make all the right choices, but here are some common mistakes people make in their 20’s

Taking Out Too Many Loans

In college, it’s easy to think “Oh, I can just take out this loan now and pay it back when I get a job.”  Student loans are one of the biggest expenses for people in their 20’s.  And their 30’s and even their 40’s.  While it is important to get an education, it’s very easy to take on too much debt.

Many people will recommend going to community college first, then transferring to a 4 year school to finish up the final two years.  That isn’t what I did, and I can’t say that I regret a single day in my 4 year university.  But the best thing you can do is live smart while you’re there.  Don’t take out more loans than you need.  Get a campus job if you can.  Don’t splurge on a great off-campus apartment – stay somewhere safe and livable, of course, but keep those expenses low.

Remember – paying back your student loans means paying back interest as well – so you will be paying back much more than you initially spent.

Spending too Much on Housing

Once you’re out on your own, it’s time to find a place to live.  Remember, your rent or mortgage payment should be no more than 30% of your income.  That can be hard in a lot of cities, especially when you’re first out of college.  So it might mean living in a slightly less convenient place or having roommates.  Maybe your place will have to be a lot smaller than you wanted.

Remember, all those great apartments you see on television shows featuring young 20-somethings?  They’re all lies.  Those people couldn’t afford those places.  But affordable places are boring and don’t make for good tv sets.

That doesn’t mean you can’t live somewhere you enjoy.  You may just have to make some sacrifices – live near a bus instead of near the train, or have two roommates instead of one. Eventually, you’ll be able to get that dream property from a premier new home builder later in life. But if you don’t save for it now and manage your current housing costs, you’ll probably never get there.

When I was in college, it was shockingly easy to get a credit card.  These credit cards didn’t have much of a spending limit, maybe $500.  And the interest rate was ridiculous.  But they marketed to students, trying to get people to sign up.  And so many students did and found themselves in debt.

It’s even easier to get into credit card debt once you’re out of college.  After all, you have a job, right?  And what’s the point of making money if you can’t spend it?  So you go out to eat, you furnish your fancy new place, and you make the minimum payments on your credit cards.

And that debt adds up.  I always recommend people never carry a balance on their credit cards.  I do think credit cards are great tools – they help you build credit and they have added protections you may not find with your debit card.  But if you’re not careful, you can also quickly find yourself in trouble.  And like student loans, you’ll have to pay this money back with interest.

Not Saving for Retirement

When you first start working, the last thing you’re typically thinking about is retirement.  And your paycheck is much smaller than you thought it was going to be, what with taxes and all, so you decide to not put any money into your retirement just yet.

This is a terrible plan.

First off, if your company offers any sort of a 401K match, you are throwing away money.  But even if they don’t, remember that this is long term investing, the sort that is designed to grow over time.  So if you can put in just 1% of your paycheck, that amount will continue to grow over the 30 or 40 (or more) years that you work.  It’s shocking just how much money you can lose out on for retirement by not starting to invest in your retirement as soon as you start working.  It may seem hard, but future you will be happy you did.

Really, the biggest key to financial success in your 20’s is making a budget and sticking to your budget.  With regular paychecks coming in, it’s so easy to get caught up in going out to eat, going out for drinks, buying expensive groceries or ordering take out.  After all, you have the money in your bank account.  And then the electric bill arrives and you don’t have the money to pay for it.  Or you find yourself short on rent.

Make a budget and stick to that budget.  If you only have $50 to spend on eating out this month, then only spend $50.  Don’t spend $55.  Spend $50.   Yes, it’s only $5, but that’s $5 you’ll have to pull from another budget category.  Do that too many times and you’ll find yourself having to pull from your rent money or going further into credit card debt.

Some fairly simple financial moves can keep you from making financial mistakes in your 20’s.  Future you will thank you.