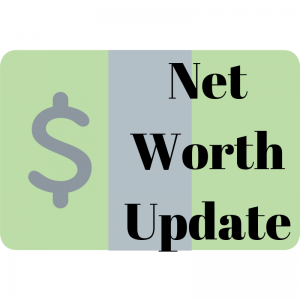 With the beginning of the year, I decided it was time to do another update of my net worth.  As I have discussed before, I calculate my net worth by figuring out the value of all of my financial accounts (bank accounts and investments), the Zillow estimate of my home and the Kelley Blue Book estimate of my car.  I don’t calculate any other personal property, primarily because it’s hard to figure out those numbers.  You may choose to calculate your net worth in a different way.  Maybe you don’t want to include your car or your home.  Maybe you have some valuable items you would like to include based on current market value.  For me, the important part isn’t the number – it’s the percentage change.  I want to see the number growing.

How did I do over the last three months?

In the last three months, my net worth increased 8%!  I was surprised at the number, but when I drilled down, it makes sense.

First off, my investment accounts did really well the last quarter of the year.  This is all money that is being saved for the future, so it’s not like I’m going to cash out and roll around in some sweet dollar bills.  Some of it is retirement, some of it is just for “the future,” but either way, I don’t plan to cash out soon.  It’s nice to see things moving in the right direction, but this is long term investing, so I expect ups and downs over the next couple of decades.

My day-to-day cash accounts are actually down, which makes sense.  My property tax and a few other infrequent bills are due in December, and I put money aside all year to be able to pay those bills.  It always feels good to watch those budget categories grow… and then they plummet in January.  But that’s the point of budgeting!

I’ve been tracking my net worth for a number of years now, so I decided to take a look back at the last four years.  My net worth has definitely grown since the beginning of 2016, but the majority of that growth has been in my investments.  I really need to increase my non-investment savings.  Right now, I’ve been putting money towards home improvement, but it’s time to take another hard look at my budget and see where I can cut back.

One thing that surprised me was how much my car’s value dropped.  It went down almost $800.  Of course, my theory on cars is that I buy them and then drive them for 10+ years and trade them in when they need more work than they’re worth.  So I’m not really worried about the value.  But this is just another reminder of how quickly cars depreciate.  They certainly aren’t investment products.  I only included my car value in my net worth calculation to offset the car loan, which I have now paid off.