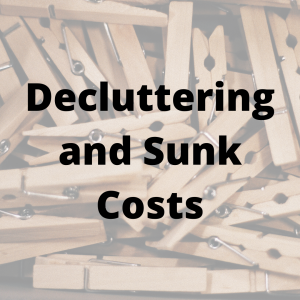 One of my big goals for 2020 is to declutter my entire house.  I’m talking everything.  Every cabinet, closet, and drawer.  I’ve lived in my house for almost nine years, and I’ve managed to fill up a lot of space.  When you don’t have to get rid of things to make room for other things, it becomes way too easy to just stash things away, only to forget they exist.  Making matters worse, I’ve lived alone for a chunk of that time since my roommate moved out a number of years back, so I’ve had extra bedroom closets to play with as well.  The living alone part is changing this year (and I will be writing about how to figure out finances as a couple), but first and foremost, I have to start decluttering.

What I’m Decluttering and Where I Struggle

Some things are very easy to get rid of.  I’ve been going through kitchen cabinets and pulling out things that I never use.  I’ve been going through my closets and getting rid of duplicates of things.  I don’t need to own quite that many sets of sheets, for example.   I’m trying to be reasonable about where I’m going with things too.  Kitchen implements go to a local charity.  Old sheets and towels are being sent to an animal shelter, after they put out a request.  Clothing is mostly getting sent to ThredUp, though I don’t expect to get a good amount of money for it.

Where I’m struggling are with the things that could potentially still have value to me.  I have always wanted to be a crafty person.  I love the idea of taking raw materials and making something beautiful.  And over the years, I have created so many beautiful things.  But I also have a problem where having enough supplies for one project just isn’t enough.  I need enough supplies for my next project as well.  So I end up buying way too many supplies, then falling away from the hobby, and everything is just stashed away.  This isn’t a unique problem – a lot of people have aspirational hobbies.  But for me, it has meant multiple bins of craft supplies stashed in a closet.  I didn’t want to just throw them out – they still have use.  And even though I know they would delight a crafter at Goodwill, I struggled with that as well.

Then I realized there was a happy medium.  I reached out to a friend who is a leader of a scouting troop and asked if she wanted some extra craft supplies.  If they couldn’t use them, she was free to pass them on to someone else or just donate them, but it took that decision out of my hands.  She was delighted by the possibility.  And it felt like a weight was lifted off of my shoulders when I was able to box up those items and set them aside.

I did still keep some of my craft supplies – some of the nicer yarns that I bought, for example, as I could very easily create a scarf if I wanted.  But I reduced down from four giant bins to one small bin.

This is obviously a very small example, but I think we’re all guilty of it.  We have spent money on something, so we need to make that expense “worth it.”  I suspect that’s part of the reason that I’ve hung on to so many things.  That and some habits learned from my grandparents who grew up during the Depression.  If it still has use or value, I should keep it.  When in reality, I’m better off passing things on to someone else who can use them, be that for money or just as a gift or donation.  I have also been working on not “keeping things for good.”  I have so many lovely soaps and pieces of stationary that I thought I was saving for something special.  But what is that special thing?  Instead, I’m making a point to use them, and it’s been a wonderful treat.

I will never be a minimalist, but I’m trying to be better about ignoring the sunk cost fallacy, giving up on my aspirational hobbies, and decluttering my home in order to make room for someone very special to join me.