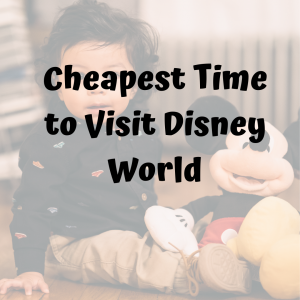 I love Disney World.  It was a dream trip when I was a kid and I still try to visit every so often.  It’s surprisingly fun as an adult, with or without kids.  But it is not a cheap place to visit.  So what is the cheapest time to visit Disney World?  And how can you save money while there?

When is the cheapest time to visit Disney World?

Not only are you looking at different rates for hotel rooms, Disney World recently implemented ticket pricing that varies on when you’re hoping to visit.

Generally speaking, the best time to visit Disney World is to go during the times that children typically aren’t off of school.  Obviously, if you’re looking at bringing your kids, that’s easier said than done.  But if you are going with younger kids or without kids at all (or are okay with taking your kids out of school), then these times are your best bet.

Typically, the cheapest time to visit Disney World is going to be in January and February, but you’ll want to avoid MLK, Jr. weekend as well as the race weekends – Disney holds Marathon Weekend in January and Princess Half Marathon weekend in February.  These might not be more expensive, but the crowds are much heavier, so I always recommend people schedule around them.

There are also good weeks available in September, October (avoiding Halloween) and early November.  If you go before Halloween, you can enjoy a lot of the Halloween decorations, and if you go after, Disney starts decorating for Christmas early.

How to Save Money at Disney World

One way people save money for Disney World is to buy Disney Gift Cards.  These can be used on anything from hotel stays to park tickets to food and souvenirs.  You can often buy discounted gift cards at warehouse stores (like Costco or BJ’s) for a slight discount.  You may have to buy them in $100 increments, but if you can get a $100 gift card for less than $100, you’re saving a little bit of money.

You can save money on tickets by not buying park hopper passes.  A park hopper pass lets you go between any of the four parks in the same day.  So you can go to Animal Kingdom in the morning and Epcot in the evening, or hit rope drop at Hollywood Studios in the morning to see the Star Wars attractions and close out your day with Magic Kingdom fireworks.  But that means an increased price in your tickets.  If you plan to only do one park in a day (you can always leave and come back to the same park), then you don’t need a park hopper pass.

Disney also lets you bring food and drink (not alcohol though) into the parks.  So if you want to save some money on food and drink, you can bring in a small cooler with your lunches and/or snacks.  I always recommend people bring refillable water bottles.  There are plenty of water fountains where you can refill and any of the food counters will give you a free cup of water with ice.