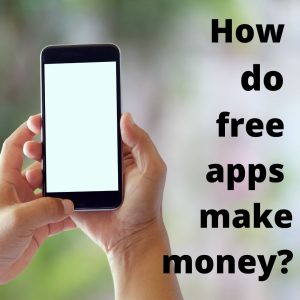 If you’re like me, you download a lot of different apps to your phone.  The majority of the apps I use are free, and that had me wondering.  How do free apps make money?  There are a lot of really great free apps out there.  Why are they letting me use their service for free?

The most obvious way that free apps make money is through advertising.  We’ve all seen it, and some advertising is better integrated than others.  Sometimes you need to watch an ad to proceed.  Sometimes if you’re playing a game, you can get a perk for watching an add.  Other ads are more integrated, such as with Twitter or Instagram.  You’re scrolling along and then you see a promoted post.  Someone paid for that post to show up in your feed.

I generally don’t mind advertising in free apps if it’s not intrusive.  I think we’re so inundated with advertising these days that it becomes easy to tune it out, plus it’s a small price to pay for something I’m not actually paying money for.  When you’re using an app, however, and suddenly the screen switches to an ad that you have to watch, that is much too intrusive and oftentimes, I end up uninstalling that ad.

In-app purchases are another way free apps make money.  This is most obvious in games.  You are playing a game and you run out of lives.  You can wait a set amount of time to get more lives, or you can buy more lives.  The extra life fee is only 99 cents, so you decide to go for it.  If you don’t do it often, say only once a week, that’s not too big of an expense for something you enjoy.  And you might be able to only spend $5 a month on the game.  But if even half of their users spend $5 a month, that adds up quickly.

And let’s be honest, we’ve all heard about those users dumping hundreds of dollars into a mobile game.  These games are designed to be addictive, to make you want to keep playing.  So some people find themselves spending a whole lot of money on these games.  Of course, I won’t judge how anyone chooses to spend their money, I just hope that they’ve budgeted for this purchase.

I’ve definitely spent a few bucks here and there on mobile games, and it has never felt like much.  But all of those small amounts adding up are another way free apps make money

Another way free apps make money is through unlockable features.  tThere are plenty of apps out there that you can use without any advertising, but these apps make money by having extra features that can only be unlocked for a fee, sometimes a one-time fee, sometimes a subscription.  Oftentimes, these are features that aren’t needed, but make the app “better.”  Other times, these subscriptions or fees turn off the ads.

For example, one app that I use with my running lets me use a lot of their features for free, but with a subscription, I get access to additional analytics.  I personally like having the extra data to review and track, but I know not everyone needs or wants that.  I also subscribe to a podcast app that gives me some additional features.  There are plenty of other apps I use where I don’t bother to pay for the additional features because I don’t need them.

The important thing to remember about the unlockable features is that this is often a subscription that will auto-renew, so make sure you’re aware of that renewal date and cancel before it renews if you find you aren’t using the features.

Unfortunately, one way many free apps make money is by selling your data.  Frequently, you are agreeing to this by agreeing to the terms of use.  This may include your location, including where you go and where you shop.  This information can be sold to advertisers and other companies who can use it to figure out how to get you to buy something.  There are a number of apps that do this without you knowing or even being alerted to it. It can definitely be lucrative and I encourage you to learn more.

How do you get around being monitored in this way?  Don’t use any apps.  Better yet, don’t use a cell phone.  Obviously, that’s not going to work for most of us, so I simply recommend being smart about what apps you download and what apps you decide to keep.  I don’t know about you, but I have a number of apps on my phone that I never or almost never use.  I should just delete them – it’s not like I can’t download them again later if I decide I miss them.

Free apps are awesome and I definitely wouldn’t say you should avoid them, but you do need to be aware of how free apps make money.  And if you really enjoy something a small developer is doing, maybe consider throwing them a few dollars every now and then.