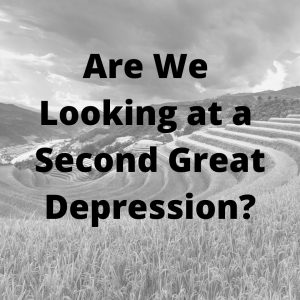 If you have been following any of the financial news, you can’t help but see the stories of joblessness and plummeting stock market prices.  It definitely feels like doom and gloom.  But are we in store for a Second Great Depression?

What was the Great Depression?

The Great Depression started in the United States in 1929 and spread globally, lasting in most places until the late 1930’s.  There are two basic theories as to why this happened.

The Keynesian Theory posits that the initial stock market crash led to “sudden and persistent reduction in consumption and investment spending.”  People pulled their money out of the stock market and stopped spending.  Because of that, companies produced less.  The theory states that if the government created more money and cut taxes so people had more to spend, the economy would have recovered.  Instead, President Hoover did the opposite.

The Monetarist Theory is the belief that the cause was the fall of the money supply, which began with the banking crisis.  The restricted money supply caused falling income, prices, and employment, because people wanted to hold onto more money than the Federal Reserve supplied.  People spent less and hoarded money, which led to losses of employment and reduced supply.  Again, the argument is that if the Federal Reserve supplied more money, the economy would have recovered.

What ended the Great Depression?  There are a number of things that led to the recovery of the economy, but many argue that it was World War II, which required a massive uptick in production and created many jobs.  Let’s hope that’s not part of our solution here.

How Does This Apply to a Possible Second Great Depression?

If you will notice, while the causes differ, the big element here is what did the government do?  In both cases, the U.S. Federal Government either didn’t act or acted opposite the public interest.  What we’re seeing now is counter to that in many ways.

Congress quickly passed the CARES Act as an attempt to stave off the liquidity problems and they’re continuing to work on the issues.  Sure, the solutions might not be perfect, but they’re definitely working in the right direction.  There are also additional loans being made by the Federal Reserve.  The federal government has learned quite a bit from the Great Depression.  If you will remember, during the economic downturns in 2008 and 2009, consumers received additional tax rebates and fiscal stimulus packages were pushed.

While government action is slow and imperfect, in this case, they are acting in a way counter to the way government acted in the 1930’s in order to prevent a Second Great Depression.

Of course, that doesn’t mean we won’t see a recession.  That’s inevitable, with the shutdown of much of the economy.  But as things slowly begin to reopen, we will see a slow regrowth of the economy.  I’ve read suggestions of this recession lasting anywhere from two quarters to whenever we have a widely available vaccine (which could be 18 months).  While that feels like a significant amount of time, it’s nowhere near the economic difficulties of the entire 1930’s.

So What Does This Mean?

All of this is to say that yes, this is a scary time.  It’s a time of uncertainty.  But one thing we don’t need to worry about is the coming of a Second Great Depression.  This may end up being a larger recession than we have seen in a while, but we won’t be reliving the struggles of our parents, grandparents or great-grandparents from the 1930’s.