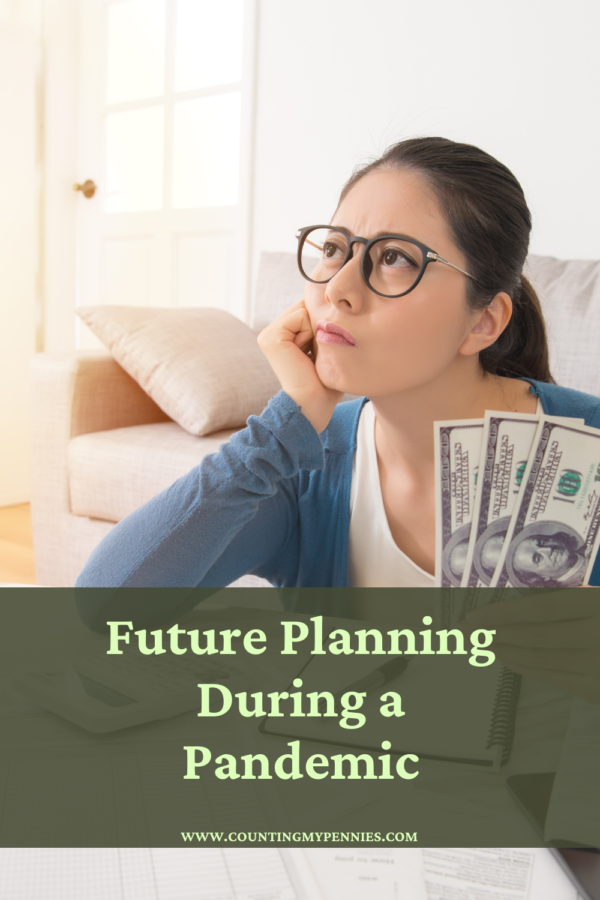 My partner and I have been lucky enough to both be able to work during the pandemic.  My job is stable right now, he has a slight chance of furloughs, but for now, our pay has been coming in as normal.  In fact, in many ways, we’ve been saving money.  We aren’t spending on gas (I’ve fueled up my car once since March) and we aren’t eating out as often.  We frequently spend our summers going to baseball games or other events, and as those have been canceled, that money has also remained in our bank accounts.  So we find ourselves wondering what we should be doing with our extra funds and how we should be future planning during the pandemic.

Obviously, first and foremost has been to put extra money towards debts.  We have decided that for us, it doesn’t make sense to try to pay off the mortgage early (we have a great interest rate), but we are putting extra funds towards other debts, focusing first on the highest interest rate, of course.  If you haven’t noticed, as the fed has been dropping interest rates, credit card interest rates are slowly climbing.  I make a point to never carry a balance on my credit cards, so I will admit, I have no idea what the interest rates might be.  But I have been receiving alerts of changes, and even if I’m not planning to carry a balance, I still should know those numbers.  I use rewards cards, and those always have higher interest rates (which is how they pay for those rewards).

We’ve been working to set aside extra money for our rainy day fund.  For us, this is similar to an emergency fund, but can be used for “less emergency” things.  Our goal is to never need to touch the emergency fund, but the rainy day fund can be re-evaluated and we can spend from it as situations change.  Right now, because there is a bit of uncertainty in his job, we’re putting a bit of extra money away just in case.  We don’t anticipate needing it for that purpose, but we both feel better having it there.

We could just rest on our emergency fund for this purpose too – the money is there and ready.  But since we do have additional money that we’re not spending, we both feel better just setting something aside for future planning, with the knowledge that when the pandemic passes and a vaccine is widely available, we can put that money into our home improvement fund.

This one is very important to us.  Because a lot of people are struggling during the pandemic, we are making a point to increase our charitable contributions and we’re trying to keep our money local.  For example, a friend volunteers at a local charity tutoring children, and since that charity can’t do their normal tutoring right now, they’re putting together care packages for those kids – things like art supplies, books, puzzles, anything to keep their minds occupied.  We happily contributed to the cause.

I use YNAB for budgeting, and one thing I do is plan for infrequent bills.   That means if I know I have a $120 annual bill due every August, each month, I set aside $10 in that budget category.  That’s easy for set bills, but sometimes there are expenses that ebb and flow.  For example, I know generally what my cat’s vet visits will cost, but the amount can shift.  So I’m putting a bit of extra money into those budget categories so I’ve got some padding when the expense does occur.  This will also help us in case one of us gets furloughed and we have less money coming in.

At some point, things will end.  We may not be going back to normal, but we will reach a new normal.  We will someday get to travel again, and that’s definitely something we’re both looking forward to.  So we’re setting aside money and making a wishlist of places we want to go, both local and far-flung.  We’ve very much enjoyed making wish lists as part of our future planning, deciding what we want to do to the house (an easy list to make, as we’re here 95% of the time), places we would like to travel, both road trips and big international trips.  So we’re also setting aside money for those future things we will want to do.  It might be years before we can comfortably travel internationally, but when we are able to go, it will be nice to have some money already set aside.  Plus hope for the future has really helped our stress levels.  It’s been fun to research trip opportunities and places one of us has been that we very much want to show the other.