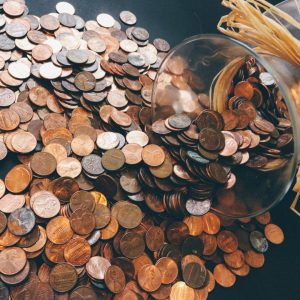 If you’ve seen the news lately or been to just about any store, you have likely seen that there is currently a coin shortage going on in the United States.  But what does this mean and what are the effects of a coin shortage?

Is there a coin shortage?

Many of the news reports talk about the coin shortage as a problem resulting from the closure of U.S. Mint facilities.  This isn’t true.  While the Mint facilities in both West Point and San Francisco closed temporarily due to COVID-19 outbreaks, these facilities don’t produce circulating coins.  They produce collectible coins and precious metals (like gold and silver bullion).  The two facilities that produce circulating coins – in Philadelphia and Denver – have both been working overtime to produce coins during the pandemic.

In fact, the Mint is on track to produce more coins this year than they have in almost 20 years.

So why is there a shortage?  While there are enough coins in existence, these coins are not currently circulating, for a number of reasons.  One argument is that coin counting machines, like CoinStar, weren’t being emptied at the same rate as before the pandemic.  That has once again picked up.  Another reason is likely because many stores stopped accepting cash and were only accepting credit card payments to avoid physical contact.  Finally, because bank branches closed, people were unable to go into the lobby and cash out their coins.

And of course, there is also likely hoarding going on.  Because there is an alleged shortage, people don’t want to spend their coins.  That leads to fewer coins circulating in the economy.

But what are the effects of the coin shortage?

So there may or may not be a real shortage of coins.  But that doesn’t mean that this isn’t having an effect on the economy.

Those without bank accounts

This is a major problem for people in low income households or what is known as the “underbanked,” people who don’t have bank accounts, credit cards, or debit cards.  If you have to pay all of your transactions in cash, those coins are critical to helping you make exact change.  Some stores are unable to make change, so instead of getting 27 cents back when you pay $5 for a $4.73 purchase, you’re getting 27 cents in store credit.  Sure, you can use it later, but when you’re living paycheck to paycheck, that 27 cents might be very important.

One story that I heard from a friend was that the coin shortage was affecting her ability to do laundry.  She uses a laundromat that takes quarters in the machines.  The laundromat has a change machine, but she also collects quarters from her change and keeps it in a jar by her laundry basket.  That ran out this summer, and the change machine was no longer stocked due to the lack of quarters.  She tried to go to the bank to get quarters, and they were unable to provide them.  Things got so bad that she ended up having to buy $10 worth of quarters for $20.  That’s definitely someone taking advantage of people in tough situations.

Finally, she put out a call to friends to see who might be able to send her some quarters in exchange for a Venmo payment.  It wasn’t that she didn’t have the money, she just needed that money in quarters.   Of course, those friends local to her emptied change jars to help out, and those of us not local set aside those quarters, just in case she needs some mailed to her.

How do we stop the effects of a coin shortage?

My example of my friend needing quarters for the laundromat is a good one and an example of why the coin shortage is a bit of a self-fulfilling prophecy.

I have about $5 in quarters.  I could just take it to a store and spend it and get it into circulation.  But instead I’m holding onto it, just in case I need it for something, or my friend needs it for laundry.  This is a very small amount, but if everyone’s behaving this way, keeping those jars of change just in case they need it, that’s continuing to keep the change from circulating in the market.

What we should all be doing is emptying those change jars and getting that money into circulation.  Some stores are offering to buy change from customers, exchanging bills for coins.  As bank branches begin to open, you can also take your change in.  Check with your local bank.  Some are allowing you to bring in unrolled coins to exchange for bills.

If you’re that worried about not having coins, consider at least taking half of what you have at home and getting it into circulation, especially if you’re the sort who doesn’t use coins all that often to begin with.