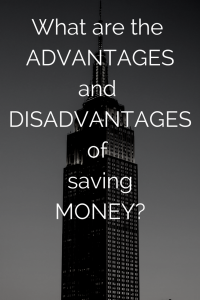 Money. It’s what makes the world go ’round, right?  And those of us in the personal finance world talk a lot about ways to save money, ways to make more money, and how to make that money go farther.  But what are the real advantages and disadvantages of saving money?

Let’s start with the disadvantages.

First off, saving money means you aren’t spending it.  And it is possible to be too frugal.  Are you doing things like skipping dentist appointments not because you can’t afford them but because you want to save money?  That is too frugal.  Sure, you save now, but if you end up needing a root canal, that’s going to cost you much more.  Preventative care is worth it.

If you focus too much on saving money, you might make poor decisions when it comes to expenses.  You might save money by hiring the cheapest contractor to build your fence, then get stuck with a fence that falls down the following year during a storm.  Sure, you saved money upfront, but was it worth it?

You can also miss out on experiences because you’re saving money.  Friends all going to a concert you want to go to, but you decide you need to save money?  That can be a definite bummer.  And if you’re always saving, you’re probably never traveling, and I think everyone should take the opportunity to travel, either within your own country or internationally.  Even if it’s just a weekend at a bed and breakfast a town over.  Take the time to take a break.  There are all sorts of different types of travel options, so find one that works for you.  Being stuck at home when you would rather be out is one of the disadvantages of saving money.

You definitely don’t want to find in your 90’s that you’re that weird old guy who never leaves his house, who looks like he has no money, who never travels, who never buys anything nice and lives like a pauper, but when he dies, it turns out he’s got millions in the bank.  There’s got to be some sort of balance.

In general, I think that everyone should have a bit of fun money in their budget.  Even if you’re trying to make a savings goal, you need to have a little bit of money you can spend on something you want, be it movie tickets or some downloadable music or a night out on the town.

Of course, for every disadvantage of saving money, there’s an advantage out there.  The big advantage to saving money is that you’re prepared when you need to spend it.  Let’s say that after your cheap fence falls down; you decide to spend the money to have it repaired properly.  Definite win.


If you are saving your money in a bank account or in CDs, you will also be making money by saving money.  All of that interest adds up.  And you can invest some of that money and help it continue to grow.

To me, the key is to balance the advantages and disadvantages of saving money.  Save, but don’t go overboard.  Don’t let that dream of early retirement mean that you’re living in a falling down shack.  Find the balance between your savings goals and your spending needs and wants.