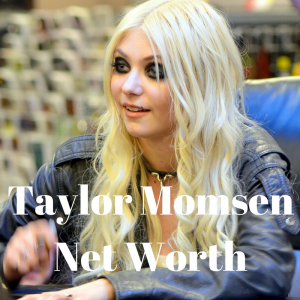 Have you ever wondered about the net worth of the people you see on television or the movies or hear on the radio?  I’m not talking about people like Beyonce – it’s a given that she has more money than any of us can comprehend owning.  But what about some of the smaller-time celebrities, the ones who lead a more normal life along with their fame?  Today, I’m going to do some investigation into Taylor Momsen’s net worth.

Who is Taylor Momsen?

Born in 1993, Taylor Momsen is best known as the lead singer of The Pretty Reckless and as Jenny Humphrey on Gossip Girl on the CW.  I didn’t realize it, but she was also Cindy Lou Who in the 2000 live-action movie, Dr. Seuss’s How the Grinch Stole Christmas. She also spent a number of years as a model.

The Pretty Reckless has been releasing music pretty steadily and in 2020, their song Death by Rock and Roll hit number 1 on Billboard’s Mainstream Rock chart, their fifth number one.

What is Taylor Momsen’s Net Worth?

The money from her first big movie doesn’t seem like that much.  Taylor made about $285,000 from How the Grinch Stole Christmas, but that’s not bad money for a kid.  Just a few years later, she made a cool million for Spy School, and she did a number of other movies during that period of time, each bringing in a good amount of cash.   Taylor was also a regular on Gossip Girl for the first three seasons and made guest appearances through the end of the series.

Taylor’s modeling gigs are a solid source of income for the actress/singer/model.  She has been seen in a number of ad campaigns and has been the cover model for Seventeen and Maxim.  She began modeling at the young age of 2 when her parents signed her with Ford Modeling.

Taylor’s passion is her music.  Formed in 2009, her band The Pretty Reckless has released four studio albums, the most recent earlier this year.  They have had five number one hits on the US rock charts and have performed on a number of national and international tours.  This summer, their song “Heaven Knows” was officially certified platinum by the Recording Industry Association of America.  Based on their success, they recently signed a new deal with Century Media Records.  Their current tour was delayed by COVID-19, but expect to see them performing again soon.  Taylor has an active social media presence which can also lead to some additional income. What’s Taylor been doing with all this money?  She reportedly enjoys fancy cars, private jets, and vacations to exotic locations (who wouldn’t?) and owns a few homes across the US.

Taylor Momsen’s net worth is approximately $4 to $6 million, and she isn’t even 30.  That’s definitely something to aspire to.  What other celebrities would you like me to investigate?