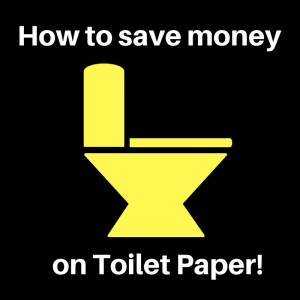 Toilet Paper.  Something most of us use and yet none of us ever wants to talk about.  That means there aren’t a ton of tips out there for how to save money on toilet paper.  I’m all about pinching the pennies where I can, so here are some of the tips I’ve come across.  These are especially useful as toilet paper is becoming harder to find again.

Do you really need a super soft toilet paper?  Seriously, are you experiencing that much of a difference?  Because one easy way to save money on toilet paper is to avoid the plush rolls. If you squeeze it and it is soft, don’t buy it.  Why?  Because there are fewer squares on that roll.  You want a nice, solid roll of toilet paper.

I grew up in a house with septic tanks rather than city sewers, so we had to be careful about what was flushed.  We used Scott Single Ply toilet paper, and you know what?  It was just fine.  I’ve continued using that even though I no longer have the joys of a septic tank, and I’ve noticed just how much longer the rolls last.  We use less than when we have a plush roll, and no one complains.

I know that I just recommended a type of toilet paper, but if you just can’t get behind (ha!) single ply, or if you’re just looking for other ways to save money on toilet paper, make a point to shop the sales.  Figure out which toilet paper is the cheapest that week.  Make sure you’re looking at just how large the rolls are, of course, but you can often get the best deals by checking out the other brands.  And don’t avoid store brands!  They can be just as good and often cheaper.

Toilet paper doesn’t go bad.  It doesn’t expire.  So if you find a great deal, stock up!  Those rolls can easily be stashed away on a shelf or under the bed.  I’m not a huge fan of saving money by stocking up on things, because I’ve found that so often, those things just end up going to waste, but I have never found a time in my life where I didn’t need toilet paper.  So you can save money on toilet paper by just buying in serious bulk.  (Just make sure the kids don’t steal it to decorate the neighbor’s trees.)

Additionally, if you had stocked up early in 2020, you wouldn’t have run into some of the shortage issues happening around the world.

I think coupons are very hit or miss.  So often, they’re for things I wouldn’t be buying anyway, so I’m not really saving money. That said, I do still clip coupons for cleaning supplies and for toilet paper and paper towels.  Again, make sure that you’re really checking the prices when you’re using those coupons, but many times, you can save a decent amount of money on toilet paper with coupons.

I know, it seems ridiculous to buy toilet paper online, but you can save money by doing so!  Amazon even has toilet paper as a Subscribe and Save item, if you’re looking to have regular deliveries.  (Pro tip – Amazon Subscribe and Save deliveries are easy to reschedule and skip, you just have to remember to login and change your delivery settings.)  In addition to Amazon, you can find toilet paper at online office supply stores, Target, Walmart, Jet, and a number of other stores.  Do your price comparisons, but when those stores are having sales, make sure to research if you can save money on toilet paper by shopping online.

Be wary of buying from unknown online sources.  Plenty of people tried this during the pandemic, worried they wouldn’t be able to find enough toilet paper.  Not only were these shipments extremely delayed (most were coming from China, and shipments from China were seriously delayed), but people didn’t exactly receive what they thought they were getting.  The rolls were incredibly small and not worth the cost or the time to ship. 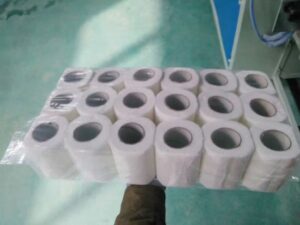 As you can see, these rolls of toilet paper are very small and not worth any savings you might have gotten.

Live in a house with small children or pets who like to play with the toilet paper roll?  Have a roommate or family member who just uses too much?  Before you put the toilet paper roll onto the holder, crush it down, so there are two creases in the cardboard roll – making it more of an oval than a circle.  The roll won’t spin quite as smoothly, and it makes it just enough harder to pull the paper that people won’t use quite as much.

What about a bidet?

You can also buy a handheld bidet – basically just a squirt bottle with a well angled nose.  Definitely a much less expensive investment, and certainly worth trying if you’re looking to save money on paper.

Another recommendation I’ve heard is one that I cannot get behind (ha ha) and that is family cloth.  Think cloth squares that are used as TP and then washed and reused.  No, this isn’t terribly different from cloth diapers and wipes, and in general, I’m a huge fan of the reusable option.  In terms of cost, if you use scrap cloth (old t-shirts and the like), the only real outlay is the cost of the hot water and soap to wash the cloth, and well, I can’t imagine how long it would take to get a full load.  This might be worth it if you’re already a cloth diapering household, but I’m not going to recommend it, and won’t be trying it myself.

That said, one of my frequent comments as people were worried about toilet paper shortages was that there were alternate materials.  Toilet paper hasn’t been around that long.  People have used all sorts of things.  While I don’t really feel like going back to corn cobs or newspaper, there are plenty of other substitutes you could use.  If you aren’t into washing the family cloth, you could always just cut up some old shirts or rags and throw them away after using (never flush anything but toilet paper).   It’s not ideal, but it’s certainly an option if times get tough.

So what are your tips for saving money on toilet paper?