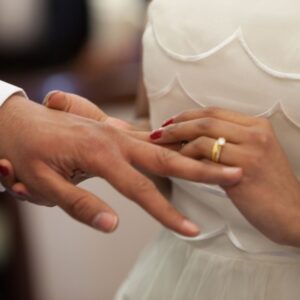 I’ve been working on our household tax returns, and now that I’m married, I took on the task of filing for the two of us, figuring that we would file as married filing jointly.  My taxes have always been more complicated than my husband’s, so I was happy to take on the task.  And then I ran into trouble.  He and I lived in separate states for the first three months of the year.  And you know what gets complicated?  Filing taxes when you and your spouse lived in different states.

I like to use TurboTax, so I downloaded and started entering once I received all of our forms.  His were easy, mine were much less easy.  I set us up as married filing jointly and everything was pretty smooth sailing.  TurboTax asked the various questions, I answered, and everything was pretty easy.  Because we were married on the last day of the year and had lived together for the last six months of the year, there were no questions regarding our filing status.  Got all the forms filled in and the amount owed to the federal government seemed about right.  So filing my taxes when my I and my spouse lived in different states wasn’t an issue at all.

Here’s where the confusion started.  I’ve had to file taxes for myself when I lived in two different states, though it’s been a number of years.  (One year, I had to file where I lived in two states and worked in three, and that certainly created a bit of complexity.)  But this time, I was filing where I had lived in one state for all 12 months, and my spouse lived in one state for three months and another state for nine months.

Turns out, there’s no good way to do this if you’re attempting to file jointly.  The paperwork takes all of your income together by household, rather than splitting it by spouse, so I couldn’t just say “Okay, this person’s income applies only to state A, and this person’s income is partially state A and partially state B.”  And thus began the confusion of how to file taxes when I and my spouse lived in different states.

What Next When You And Your Spouse Lived in Different States?

But there are exceptions.  And we fall into those exceptions.  Some states require you to file the same status on your federal and state returns.  And we live in one of those states.  So to file our taxes when my spouse lived in a different state for part of the year,  it turns out we need to file married filing separately.

It’s certainly not a problem to do this – we’ve both been doing our own taxes for years, so filing in this way doesn’t change much.  I do have the federal numbers calculated, so once we’re both done, I might compare the two and see how the numbers play out – did we do better filing together or separately?  Either way, next year we’ll be filing with a dependent, so we’ll certainly be filing jointly, but this has been an interesting lesson in tax preparation.