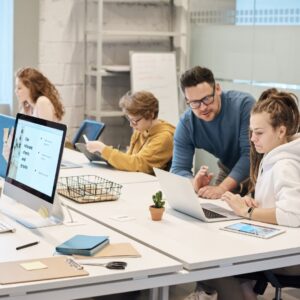 When things are going great at your job, it’s rewarding to see your hard work acknowledged with a promotion.  But what happens when your promotion opportunities dry up?  It’s very likely to happen to many of us – there are only so many spots at the top of any company.  So what do you do when you find yourself hitting the career ceiling?

What is a career ceiling?

Career ceilings come in two forms.  One is the more traditional type of ceiling that I mentioned in the intro.  Let’s say you’re on a ten person team at work and you have one supervisor.  The only way for you to get promoted on that team is if your supervisor gets promoted or leaves for a different job.  That’s a temporary ceiling, but ceilings like that can last a long time. You might also be on a very high performing team with other team members who deserve the promotion as much as you do.  Additionally, as you rise in the ranks, eventually, you run out of places to go.  A company only has so many people on the executive team.

You have also likely heard of the glass ceiling, which is a term for the invisible barrier that many women and minorities face in attempting to rise through the ranks of a company.  Even though they are often better qualified, women and minorities have historically been overlooked in favor of others when promotions are available.

There are two major things you can do if you find yourself up against a career ceiling – stretch yourself and make yourself available for other opportunities at your company or start looking for positions in other companies.

If you like where you work, it can be worthwhile to make sure that your value is noticed.  Offer to take on tasks that stretch your skill set and show that you can be valuable in areas other than the one you are in.  You may also want to talk with your boss or another mentor in your company to get advice on what to do next to advance your career.  Companies want to keep good employees, so there may be a way for you to be promoted that you just haven’t seen yet.  You may need to make a lateral move to put yourself in a position with a higher ceiling or no ceiling at all.

Alternately, you can start looking at other companies, see who might be hiring.  A beloved coworker of mine recently went this route.  She realized that there wasn’t much upward mobility available for her based on the positions available and what she wanted for her career, so she applied elsewhere and is in a new job she loves.  She didn’t dislike what she was doing, but realized that for her career she needed to make this move.  I was sad to see her go, but delighted that she found something that works for her.  And she left on good terms, so it’s not completely out of the question that she could rejoin us some day at a higher level.

What about going out on your own?

Depending on what you do for a living, you may be in a position to strike out on your own and start your own business.  This isn’t a small undertaking, though, and personally, I wouldn’t recommend it just because you’re hitting a ceiling at your current company.  You need to want to be in business for yourself, not just want to be the boss.  You’ll see this recommendation a lot, but I think it’s something you would need to very seriously consider before striking out on your own.