People make art out of many different things.  Did you also know that includes coins and bills?  And it’s more than just bars pasting dollar bills onto their walls.  Here are some cool items made from coins and bills.

Is it legal to make art from coins and bills? Isn’t it illegal to deface currency?

Technically, it is illegal.

However, in general, the government isn’t going to go after someone making art out of currency – it’s just not worth their time. The problem with defacing money in this way is that the government then has to go make more.  Let’s say you take 20 $1 bills and make it into art.  The government then has to make 20 more $1 bills – and even if it costs them $20 to make those bills (it doesn’t), it’s much cheaper to just make those bills than to go after someone for making art.

Also, note the word “intent.”  The intention here isn’t to render it unfit to be reissued – the intention is to make art.

Classic hobo nickels are made using engraving on buffalo nickels, which were first issued in 1913.  The large profile on the heads side of the coin made it easier for artists to engrave into the coins.

A cool way to make art from money that doesn’t involve defacing the bills is known as moneygami, or origami from money.  This involves intricately folding a bill or bills to make another item.  The best moneygami uses the imagery from the bill itself as part of the art. 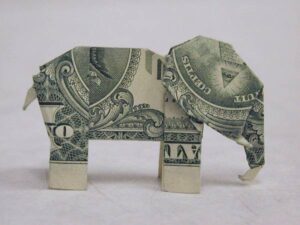 Collages and other art forms

Other artists use money in collages, such as this artist, who does an amazing money map of the world.  You will also find people who have tiled floors or countertops with pennies for a very cool effect.  EPBOT even put together some instructions if you want to make your own penny desk.  Still others use stamps and drawings on individual bills and then return them to circulation, so you might even find some art in circulation!

What can’t you do?