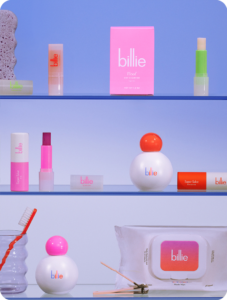 I’m still a happy user of Billie razor after subscribing a few years ago.  Billie Razor is a subscription service where you get great five blade razor cartridges sent to you in the mail on a regular schedule.  The cartridges have a shave gel built in, and they recommend you change your blade every seven shaves.  Though I admit, I may have shaved a bit less during the pandemic, I still like being able to pull out a fresh new razor without having to worry if I had purchased additional blades.   So here are four things to know before subscribing to Billie Razor.

What does it cost?

When you sign up for Billie Razor, for $10, you get a handle, magnetic holder, and two refill cartridges.  Refills come in packs of four cartridges, and they also cost $10.  Shipping is always included.  For comparison, right now at my Target, Venus five blade razor cartridges cost $18.  So this is a great deal, and you don’t have to go to the store to get them.

How often does it ship?

When you sign up for Billie, you tell them how often you shave and they recommend a shipment schedule, either every month, two months or three months.  So it’s really up to you how often you want to receive a shipment.  To me, this is one of the most important things to know before subscribing to Billie razor.  You aren’t signing up for a monthly subscription (unless you specifically want one).  You can get blades on a schedule that works for you.

Is it easy to change shipments?

Yes!  This is something I love about Billie.  Before your next shipment arrives, they send you an email telling you that it’s on the way and you can add more products to your shipment or you can change your shipment date.  I used this a lot last year when I really didn’t need more blades – I just pushed out the next shipment without any issue.  This is probably my favorite feature.  So many times, companies like this make it hard to change things, but Billie makes it easy and sends you a reminder.  No surprises here.

How easy is it to cancel?

While I’ve not cancelled, I went through the process of starting to cancel to check this out for this article.  You just change the number of items you want.  Currently subscribed to one pack of razors?  Change that to zero.  Easy as that.  No phone calls, no emails, just a quick change in your account.  Again, this is where Billie does things right.  They don’t lock you into something you can’t easily get out of.  This is something you should know before you subscribe to anything, but it’s definitely a thing to know before subscribing to Billie razor.