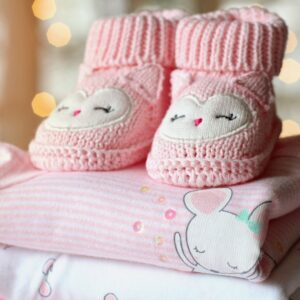 I’m in a couple different parenting groups online and I have to admit, I’ve joined some buy/sell/trade groups just for the ridiculousness of them.  I didn’t realize just how expensive everyday baby items, like blankets and clothes, could be, and I certainly didn’t realize just how many parents would go crazy for these expensive, limited edition items.  But as one parent put it, “I can buy this now, let my kid wear it, and then re-sell it for more than I paid.  It’s an investment!”  But is clothing an investment?

What is something worth?

Something that I see often is people saying “This item is an investment, because I paid X, but it’s really worth Y.”  The question is, what makes something worth a specific amount?  Items are only actually worth what someone will pay you for them.  This is something my mom said frequently during the Beanie Baby craze.  Sure, some of the toys were more valuable that day, but in two months, would anyone be willing to pay you that much?  And it’s not like you see Beanie Babies being sold for hundreds of dollars now.

When things are limited edition, people get excited.  They snatch up the items and things sell out quickly.  Sometimes they put them away for safe keeping to resell later.  Some, known as flippers, immediately put the item online for much higher than the original purchase price.

The problem happens when people buy items with the belief that “It’s okay if I spend this much money now, because I’ll be able to resell later and recoup my costs.”  While those items might be selling well now, when you’re ready to sell, will that still be the truth?

Lately, I’ve seen it with a certain brand of pajamas.  Yes, sleepwear.  Used clothing with “limited edition” patterns is being resold at or above the original purchase price.  That’s awesome if your kid has outgrown something and you’re ready to get rid of it.  But that doesn’t mean that you should buy a ton now with the expectation that you will recoup your money later.  What if the market changes?

This has happened with a particular brand of baby carrier.  They were hard to come by and people were willing to pay a hefty premium to get their hands on one.  If you bought one and didn’t like it, no problem, you could resell it for at least what you paid and probably quite a bit more.  Now, just six months or so later, the manufacturer has managed to meet the demand and the market has dropped out and people aren’t able to resell the carriers for a premium.  Why would someone buy a used carrier for more than they can buy one new?

What about investment pieces?

You will hear some items of clothing referred to as investment pieces.  This isn’t a financial investment in the traditional sense.  Rather, it’s an investment in your wardrobe.  Rather than buying something fast fashion that won’t hold up, you spend more money on staple pieces for your wardrobe that will last for years.  Examples of this might be a blazer or a nice jacket or a suit.  You won’t be reselling these to get your money back, rather you will be wearing them for so long that you will truly get your money’s worth out of them.