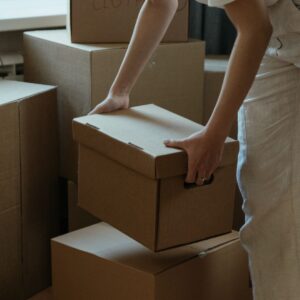 Spring is here! (Though as I’m writing this, it’s below freezing outside, so your experience of spring may vary.)  And with spring comes Spring Cleaning, at least in my house.  It’s the chance to declutter, go through winter clothing that didn’t get worn, pack away holiday decorations, and get ready for the summer.  But can you make money by spring cleaning?

One of the easiest ways to make money by spring cleaning is to declutter and sell those items that you aren’t using.  There are a number of great places to sell items.  This year for Spring Cleaning, I’ve been listing things on Facebook, both on the marketplace and in various local buy and sell groups that I’m in.  These groups are especially good for kids’ items.  I’ve also been listing some items on Mercari.  Here, I have the best luck selling clothing, though I’m trying it out for a few other things as well.  Of course, with Mercari, you have to ship, so if you’re selling something heavy, the shipping costs might be enough to keep your item from selling.

Know What You Own

This seems counter-intuitive, but when you spring clean, take stock of what you have.  It’s all too easy to put something away in a cabinet and then forget about it.  How does finding it save you money?  Because you won’t buy it again.  This morning, I actually put on a shirt I found in my closet that I totally forgot I owned.  I was at risk of buying something similar, but managed to save that money by knowing what I have.

I’m bad about stocking up on consumables such as cleaning supplies and bath and shower products.  I probably own enough soap and body wash to last me five years.  By taking stock of what I own, I can prevent myself from spending more money, which isn’t quite making money by spring cleaning, but it’s certainly better than spending!

Don’t Save It For Good

Are you guilty of saving certain items to only be used for special occasions?  I think this is something we’re all guilty of.  Maybe we have fancy dishes or special personal care items that we’re saving for the future.  Unless you have a reason you’re saving it, use it!  Why have fancy dishes taking up space in your cabinet.  And if it’s too much of a hassle to use them (maybe you have an old set of china that requires delicate hand washing), is it worth keeping them at all?  If it’s not something that you truly love and use, consider getting rid of it and thus making some money by spring cleaning.

It Isn’t All About Making Money

Sometimes, spring cleaning isn’t profitable.  We just recently took a load of things to Goodwill.  These were items that we no longer needed or wanted, but that weren’t going to sell online.  They were still in good shape, and by donating them, someone else might get some use out of them, and more importantly, they’re out of our house, leaving us with more space and less clutter.  I don’t know about you, but when things get too cluttered, I find myself getting stressed, so sometimes, it’s worth it to me to just clear out things that I’m not using, even if I’m not making money.