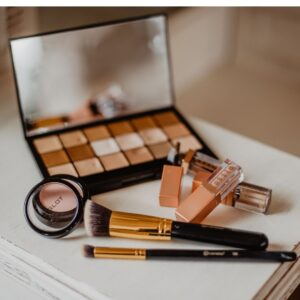 Lately, I’ve been seeing a lot of people on social media talking about Seint cosmetics.  I have to admit, the videos make it look really impressive.  I’m not great with contour, so the idea of foundation, contour, blush, and highlight all in one palette is really appealing.  I would love to be able to easily apply and blend and suddenly have a full face of makeup.  But one little thing in the videos made me suspicious.  Is Seint an MLM?

Seint is a makeup company from Cara Brook.  Formerly known as Maskcara, Seint primarily advertises their customized palettes.  In a single palette, you have highlight, contour, lip/cheek, and illuminator.  Put them all on your face in paint-by-number style and blend, and voila!  At least, that’s how they make it seem.  They claim that the makeup “enhances skin tone, camouflages blemishes and dark circles, sculpts features, and creates the “perfect lighting” on your face.”

So why was I suspicious of Seint?  Because every person showing it says you should reach out to them for a color match.  Let’s be honest, who doesn’t want help picking foundation colors?  But when someone is immediately trying to get your contact information, that screams MLM to me.

Is Seint an MLM?

Yes.  Seint is a multi-level marketing company, or MLM.  To buy, you need to purchase through an independent “artist.”  (You can currently buy from the Seint website, but that will just link you to an independent artist.)  I found a copy of their compensation plan, and as with all of these companies, artists make money based on what they sell and on what the people “beneath” them sell.  Classic pyramid scheme.

And the thing is, the product may be great!  But by purchasing, you’re supporting a business model that takes advantage of people.  And it probably increases the cost of the product unreasonably.

What Can I Use Instead?

There are plenty of great makeup palettes out there.  One that is similar to Seint, but that has better reviews and costs less is Salt New York.  That is far from the only one.  Just remember – if you can only purchase from a consultant, and that consultant tries to get you to sign up under them, that’s a distinct sign that it’s an MLM and you should avoid those at all costs.