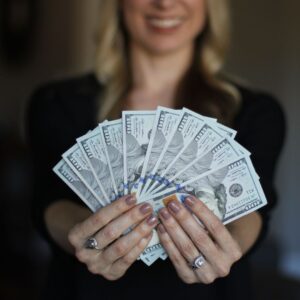 This past month, we’ve had a lot of expenses.  Early in the month, we purchased plane tickets for two upcoming trips in order to lock in a good rate.  Our quarterly state and federal estimated taxes were due.  Then our house issues began, and we had to pay for plumbers, mold remediation, and repairs.  I also had some medical bills come in from an emergency room visit.  It was an expensive month.

Because of good planning, we didn’t have to go into any debt for this.  Yes, we put all the charges on the credit card, but it gets paid off every month.  However, it definitely meant that the budget was incredibly tight this month.

I have always made a point to set aside an emergency fund.  This money is to be used for unexpected repairs or other expenses that aren’t part of the normal budget.  But I always try to use it as sparingly as possible.  This time, we didn’t have a choice – with all of the other expenses we had during the month, we had to pull from the emergency fund.  I’m so glad that we had the money there.  Of course, spending from it means that we need to put that money back over the next few months.

If we hadn’t had so many other expenses this month, I would have started by pulling from fun money and other discretionary funds, but I had already reduced those significantly to cover our upcoming trips.

This month, I definitely hadn’t planned ahead as much as I should have.  I knew that the estimated taxes were due, but I hadn’t set aside enough money and I had to pull from savings.  I definitely regret that situation, and need to plan better.  This is the first year we’ve had to pay estimated taxes, and I haven’t been as good about tracking the process as I should be.  I’m definitely hoping that it’s an overestimate and we will get some of this money back – but it also means we won’t have to make a large tax payment in the spring.

Downside of a Tight Budget

I’m definitely feeling the squeeze of having raided all of our fun money (not that our upcoming trips aren’t fun).  It’s been hard to not have a bit of spending money jingling in my pocket when I see little things I want to buy.  It’s definitely a reminder to me that budgets shouldn’t be so tight that there’s no room for fun.  You certainly can’t have too much fun, and some months may not have room for a lot of fun, but it’s tough when you spend so much time working and making money and then feel like you can’t spend it on what you want.