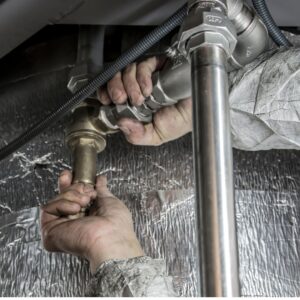 Any time you have work done on your house, one of the things you have to do is choose a contractor to do the work.  Most people will recommend that you talk to multiple contractors and get estimates.  Unfortunately, we’ve had to have work done on our house before, but fortunately, that meant that I already had contractors that I knew and trusted, which made the process a lot easier.  We had to work with two companies – a plumber to do the pipe repairs and a mold abatement company to do the mold removal and the repairs to the walls.

The repairs are complete, though I wouldn’t say that the house is back into the original condition.  We had the holes in the walls patched and they’re ready for sanding and paint, but because we’re planning to do some additional work in that space, we are waiting to paint.  Additionally, we had to tear out a section of carpet, and that is still sitting bare, again, waiting for the renovations we’re planning to do.  But the problem is fixed and the space is safe.

We were able to finish up the main part of the insurance claim last week.  Ultimately, the plumbing work wasn’t covered, nor was the mold abatement.  But I was delighted to learn that the repairs were covered, which I didn’t expect.  I knew that generally speaking, normal wear and tear isn’t covered on an insurance claim, so I made the assumption that because the damage was due to an aging pipe cracking, then nothing would be covered.  But that turned out to not be true at all – repairing the damage to the walls was absolutely covered (but not the mold abatement).  It also covered damaged property – we lost a bookshelf and a few other things due to water damage, and that was covered.

Our homeowners policy has a $1000 deductible on it, but the work cost more than that, so the insurance company cut us a check for the amount over $1000.  While the insurance payment didn’t cover a lot of the expense, every little bit absolutely helps.  I’m so happy to be able to put this money back into the emergency fund.  I wish I had known how the insurance coverage worked when I previously had water damage in the house.  It definitely would have helped make a dent in the expenses.  Lesson learned.