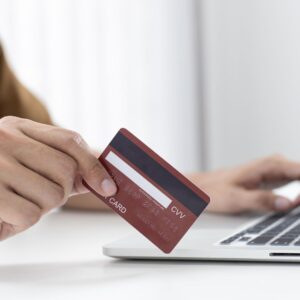 This week, I got an unsolicited NetSpend debit in the mail.  It had my name on it and looked like a normal credit or debit card.  Except I didn’t open a NetSpend account.  So I did some searching to find out why I got a NetSpend card in the mail.

For some people who were receiving stimulus payments from the government, if they didn’t have your banking information when it was time for a stimulus, you may have received a NetSpend card in the mail with your stimulus money.  These stimulus payments were sent three times between April 2020 through December of 2021, so it’s been nearly a year.  I don’t think this NetSpend card is stimulus money (plus the IRS has my banking info and trust me, I pay attention when they owe me money).

When I was searching, I saw a lot of people commenting about receiving a NetSpend card in the mail and worrying that this was some form of identity theft and that an account had been opened in their name.  While that can always be a concern, I wasn’t too worried about that being the case here – because if someone wanted to open up an account in my name, wouldn’t they need the card in their possession?  And since it was a debit card and not a credit card, I wasn’t sure how they would benefit even with the number – it wasn’t like I was contributing any money to the account.  Still, never bad to look more into the issue.

It turns out that the NetSpend card I received was actually a solicitation.  In very very fine print on the paper the card was stuck to, it said that the card was being sent for purposes of solicitation and that by activating the card, I was agreeing to the terms and conditions that came with the account.  This feels very shady, especially knowing that many people have received NetSpend cards in the mail and may just assume that it’s another stimulus check coming their way.  And these cards charge you to check your balance and have all sorts of fees attached.  Definitely feels very scammy to me.

So if you’ve received a NetSpend card in the mail and aren’t expecting one, definitely look into it before just activating the card.  It could be legitimate, or it could be a scam trying to get you to sign up with them.