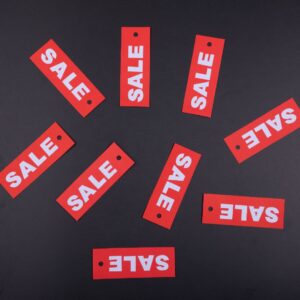 Are you planning on doing any Black Friday shopping?  It’s definitely hard to avoid all the advertising coming at you from every direction.  The pandemic has definitely driven a lot of the sales back online.  But what are the best Black Friday deals?

A lot of stores are starting their Black Friday deals the Monday before Thanksgiving.  So check out prices now to make sure that you’re actually getting a deal when the new prices are announced.  And if something looks like it’s already priced high, that’s definitely a time to be suspicious.  Is that deal really a deal you can only get now?

Don’t Get Sucked In

For me, the biggest tip I have is “Do I really need/want this?”  Just because something is on sale doesn’t mean that it’s actually a deal for me.  If it’s not something I would otherwise buy, or if I’m just considering buying it because it’s discounted, then it’s probably not worth it.  Now, I’m all about watching for sales on things I’ve been considering buying or on things that I use regularly.  I did a big wardrobe cleanout recently and could use a few new pieces for work.  I’m keeping my eye out for discounts for Black Friday, but I’m not going to buy something unless it’s really what I’m looking for.

Be Wary of Doorbusters

While this is becoming less common, a lot of stores will have what they call Doorbusters – items that are on deep discount but there are a very limited number.  A lot of times, these are electronics – tvs and the like.  While these can be at a deep discount, it turns out that these are frequently versions of the item designed specifically for these doorbuster sales.  You won’t find them around at other times of the year and they may not have all the features that a typical item would have.  Does that mean you shouldn’t buy it?  Not necessarily, but it’s not the crazy deal they’re making it out to be.

My biggest tip for Black Friday shopping is to make a list of things you would like to buy – Christmas gifts, items for your home, things along those lines.  Set yourself a shopping budget.  Then check out the sales.  Do some web searches before you buy.  Be wary of extremely limited time offers or limited quantities unless you’re very aware of the product and historical prices.